The lack of daylight hours and bouts of miserable winter rain continue to frustrate me. Although I keep trying to find somewhere fresh to go or something different to make photographs of I keep returning to my well trodden routes. Because they are convenient, I think. A soft option for someone averse to decision making!
Nothing much has changed around the route but every so often I happen across something going on. Another example of potatoes being dug the hard way being one such event. 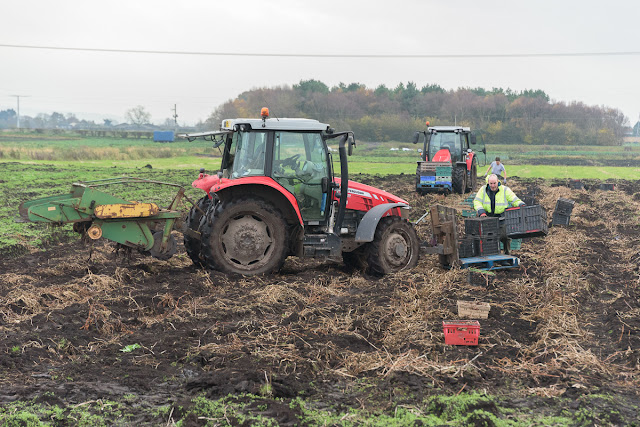 The flooded fields remain flooded and no attempts seem to be being made to drain them. Making pictures which show nothing happening isn't easy. 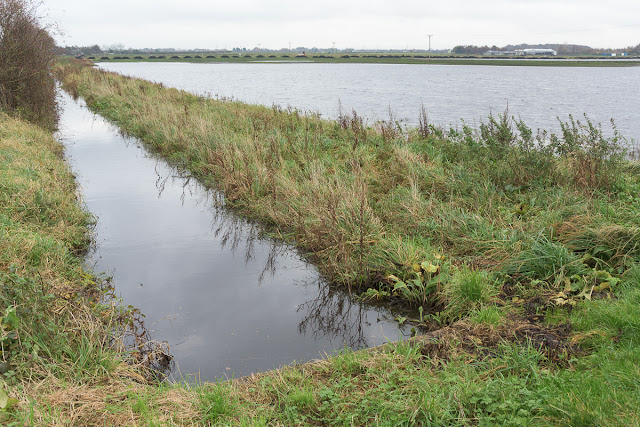 A few times I have been lured out late by the sky on days I had no intention of taking a camera out. I always seem to end up taking pointless pictures when I go looking for light or weather effects. They're sort of nice to look at but don't say much about anything. 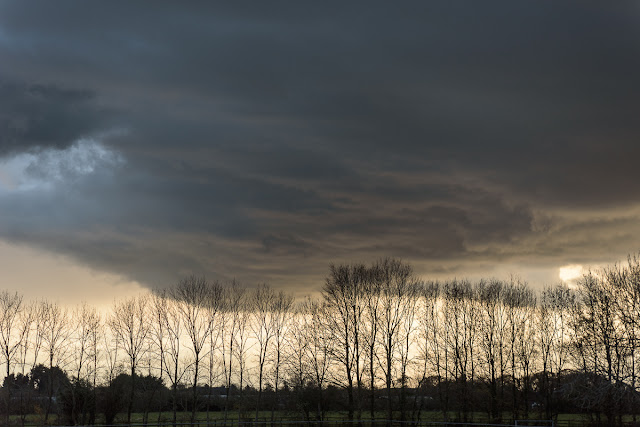 Having seen the sky looking interesting as I walked out to the moss the inevitable happened. It stopped looking interesting as soon as I got where I wanted to photograph it from. I was going to do a circuit to return home as dusk approached but got distracted by a rare call on my mobile, during which I decided to take the shorter way back by retracing my steps.
I was still holding my phone to my ear when I saw a potential picture forming as a tractor, lights on fore and aft, was coming towards the road. Low light and one hand on the camera didn't make it easy to take a decent picture. Had I not been handicapped I would have got closer and changed my angle to catch the tractor and trailer as they turned onto the road itself. Bad timing in one respect, but had the phone not rung I'd not have had any chance as I'd have been half a mile away. 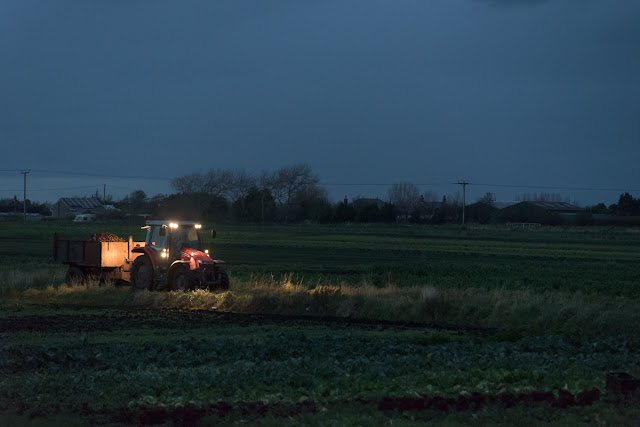 I walked on only to hear a second tractor coming along behind me when I'd put the phone back in my pocket but was already tramping through the muddy field. More bad timing. 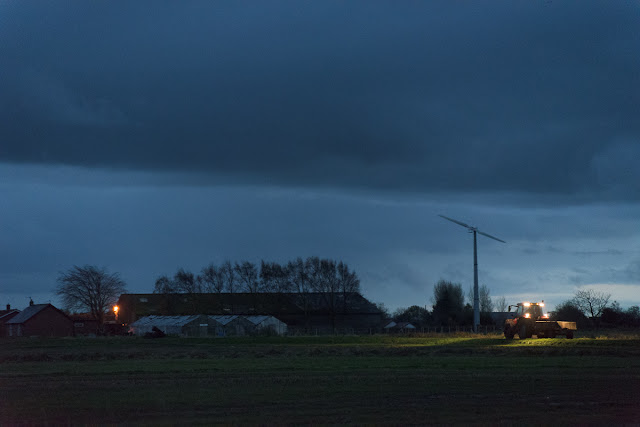 Next time out I made an earlier start and went looking for the Zwartbles. This time my luck was in. I saw a four by four towing a small sheep trailer coming my way and guessed where it was headed. It passed me just before the sheep field and pulled over. The trailer already opened when I got close so I only managed to grab three or four shots of the Zwarts being released to join their flockmates. Now I know why the mineral bucket was placed where it was. To act as a gate stop. 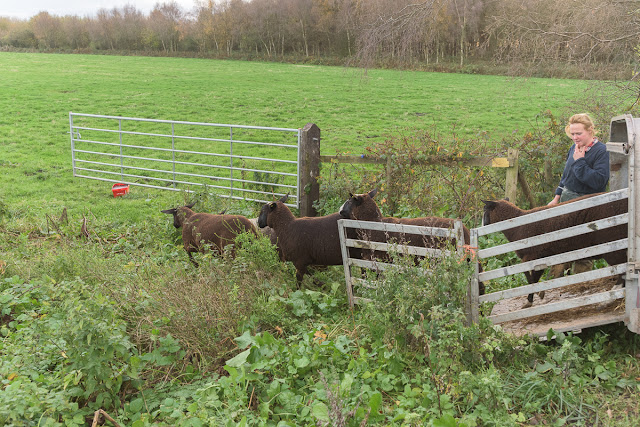 A couple of days later the sun shone again and, after much indecision I headed out to the far end of the moss and the strange lane. I had nothing in mind to photograph and expected to find nothing really. Perhaps I was looking for sheep now I know they are run in these fenced fields. There were none but I thought I'd have a go at one of my un-picturesque landscape pictures. On the second exposure serendipity kicked in and a kestrel appeared (unseen until I processed the file) in a position which makes it look as if it has been added in manually. 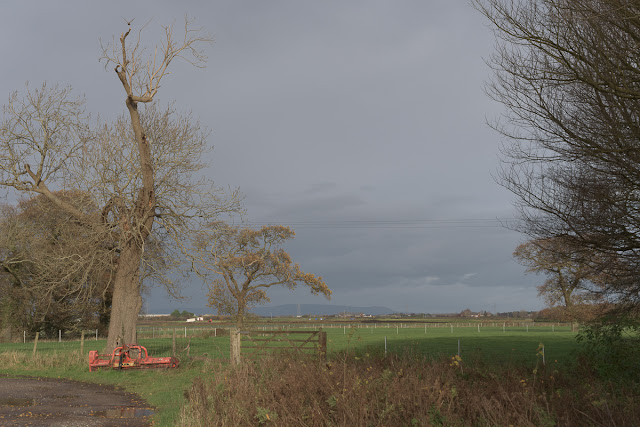 A short distance further on I spotted a rusting wagon in an overgrown field. It must have been there on my previous walks down the lane but this was the first time I noticed it. Perhaps there were fewer leaves on the hedges and trees this time. I only took two frames. One with the out of focus leaves in the foreground and one with. I prefer the one with as it gives more of a sense of the wagon being hidden and neglected.. 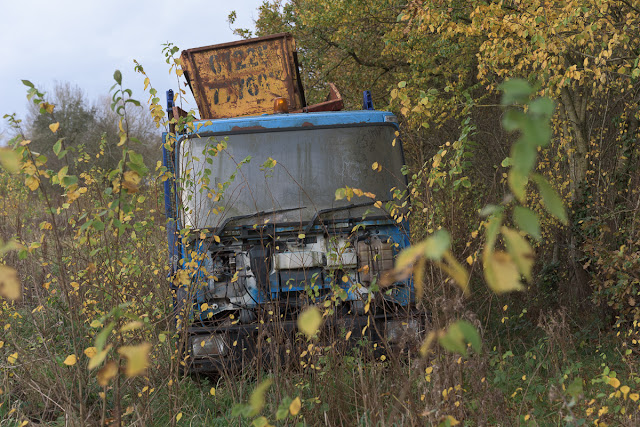 My next walk was a long one to the Post Office in the next village and then back along a section of lane I haven't walked before, although I have driven down it many times. Even so walking makes things look different to driving. Your viewpoint is altered and you have more time to look around.

I didn't stop very often before I reached the footpath I was going to cut across on to the moss. Only one frame made a decent picture. yet another 'slap it in the middle' picture of mine. This time a caravan in front of a greenhouse. Had the sun been shining brightly I probably wouldn't have bothered. For two reasons. It would have been behind the caravan and the colours wouldn't have been so muted and harmonious. 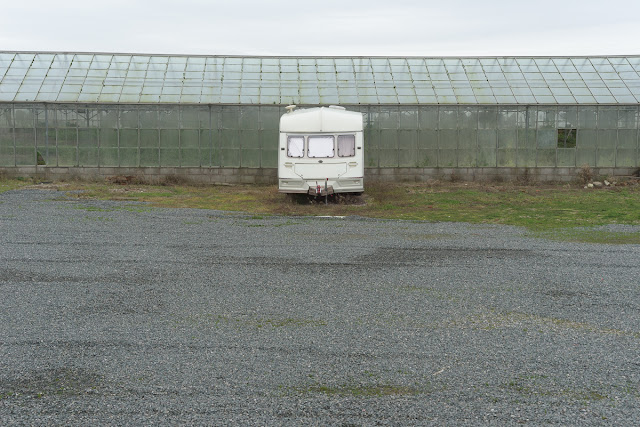 The same possibly goes for these pallets serving as a barrier to block an opening in a shed wall. I just liked the shapes and pastel colours. 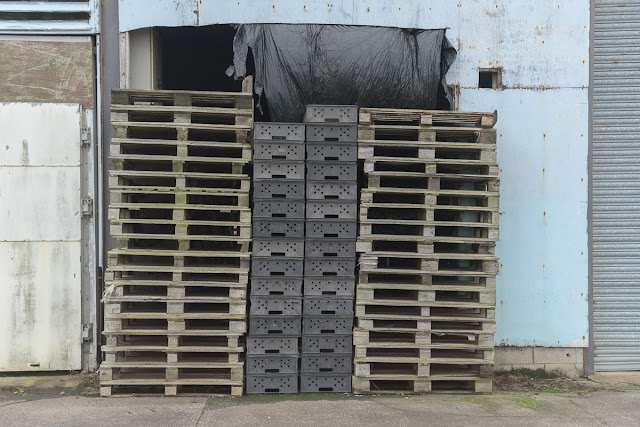 Down the footpath, which is a farm track, I got in close to some (I'm told) kale and made a few pictures. This low level viewpoint gave one plant an heroic look. The framing of it by the adjacent rows of kale also reminded me of the multitude photographs of the tree at Sycamore Gap! 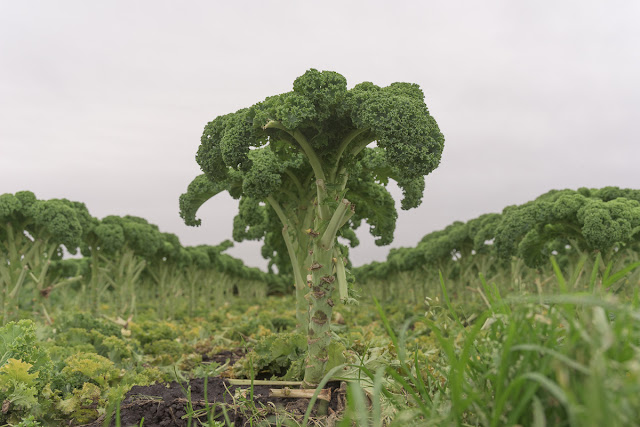 Nearing home I made yet another picture of some maize stubble in a flooded section of field. One of my better attempts I think. 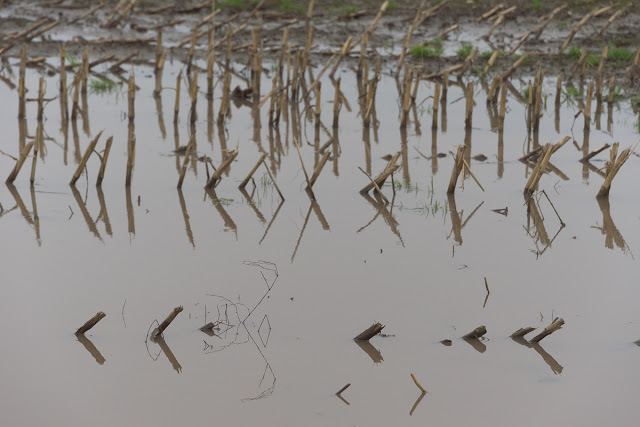 The next day I left it late to go out and saw a dramatic sunset forming. However I'd found a field of stubble beet had been stocked with sheep and I first went to look at them. Skittish animals and a ditch in the way wasn't conducive to catching them munching away, and some crates stacked in the field behind, with the sun in my eyes, made for unsatisfactory pictures. So I went to get some space and photograph the sky. Pretty. But pretty pointless. 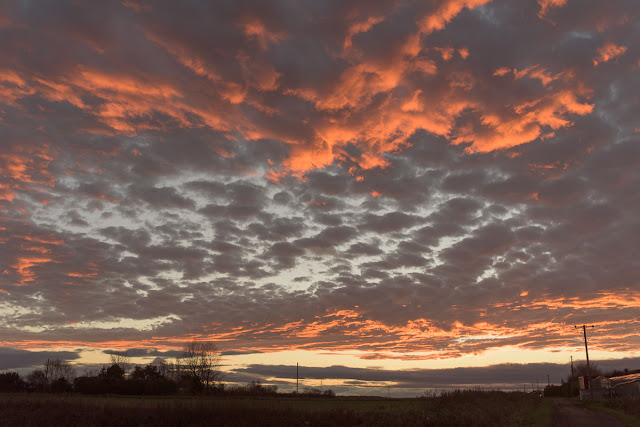 A day of rain followed keeping me indoors.  British weather is nothing but variable. The day after was still and sunny. I managed to get leave home in the early afternoon, hoping to see some work going on in the fields. There was nothing happening, so I was reduced to photographing an unsual cloud formation. What struck me was the way the clouds formed rows mimicking the rows of vegetables, and the blue of the sky was a match for that of the trailers and crates. Maybe a little more than a meaningless picture of some clouds, after all. 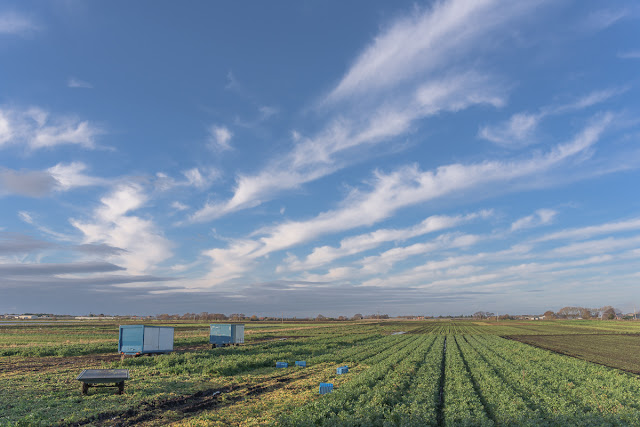 Most of these pictures have been taken with my 'new' lens. I'm happy with the restricted zoom range. That has forced me to take pictures more like I want to. I'm not fretting over the ones I miss through lacking the longer end of my 28-300mm 'crutch'. Sometimes the lack of a wider wide end does frustrate, but it does mean I avoid they look of 24mm or wider. To compensate I've started taking a second camera to cover 28mm - maybe with a 20mm for extreme emergencies...
What had been making me doubt the wisdom of this lens choice was the colours it was producing. Different lens manufactures do produce lenses with different colour reproduction. This one was bluer than what I'm used to. Especially so in gloomy light. Even with the white balance tweaked I couldn't get it right. That was until a post on Talk Photograph to a YouTube processing tutorial gave me a clue as to how to solve the problem. I doubt it would have occurred to me unprompted. I haven't used the technique in the video, but selecting a different camera profile (in camera or in Lightroom) has got the colours matching my other lenses. Whenever my usual profile doesn't give me the look I prefer I now know how to switch it so it does. All I have to do now is decide if I can let The Crutch go. I think I can.
Posted by Dave Lumb at 20:08