A slow month's catch up

May was very wet, which hampered my wanderings. I still got out round the moss when dry weather and spare time coincided and found some useful photographs. By the end of the month, however, it was obvious that my enthusiasm for following the same routes and photographing pretty much the same things was waning. 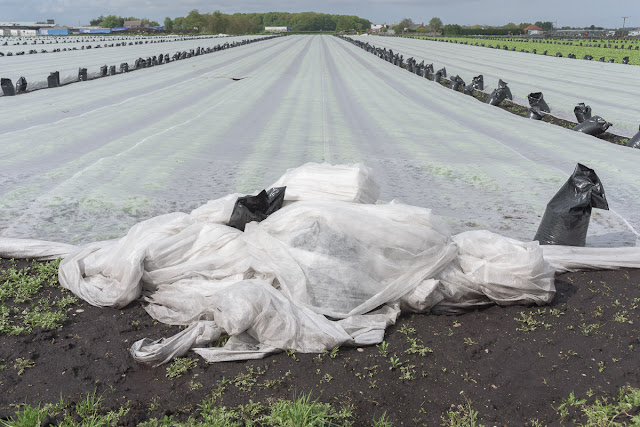 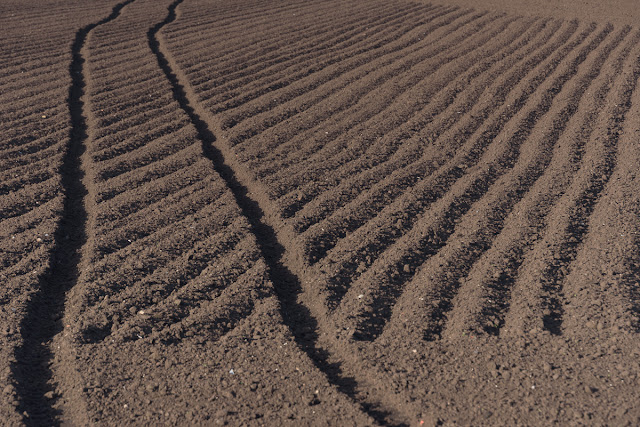 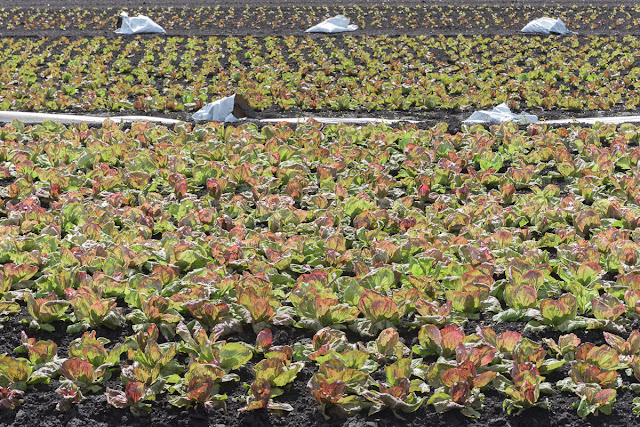 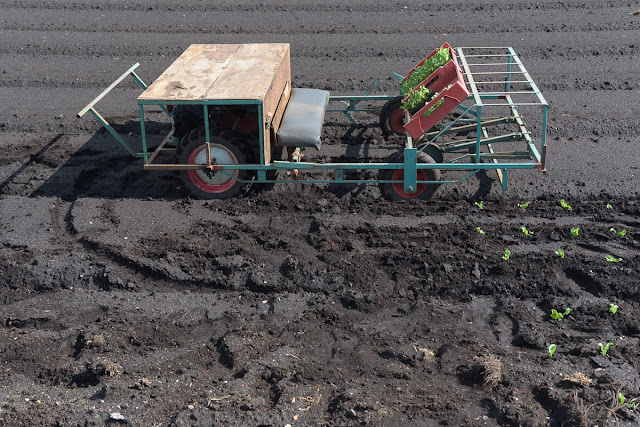 I did manage to get a few 'work' pictures, which are more interesting to me than the unpeopled pictures. taking that sort of photo from afar, as the ditches force me to, isn't ideal and I do wonder if they are worth taking because of that. Still they do show what was going on. In this case a low tech way of feeding out insect netting. 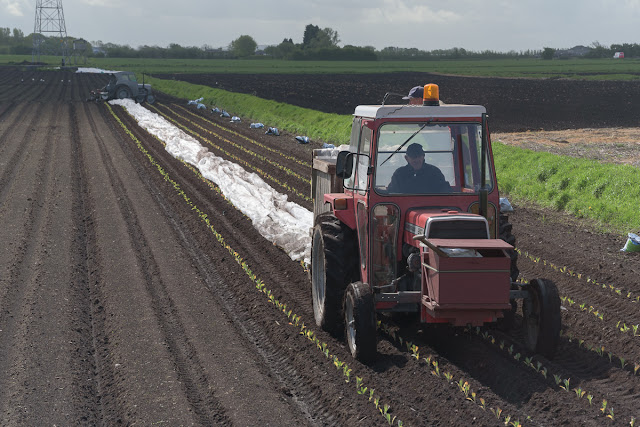 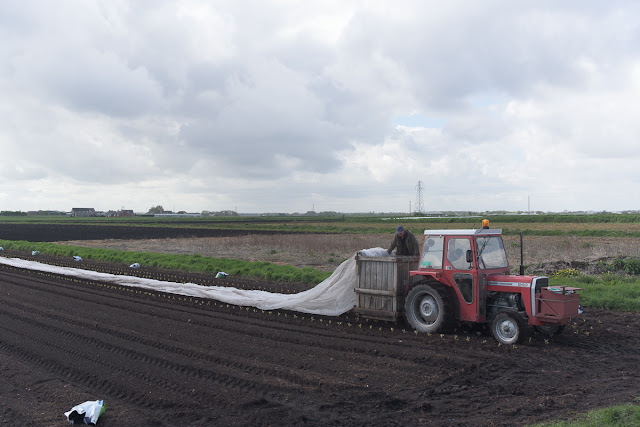 Among my pictures of inanimate objects were one of a Mylar strip bird scarer which I think might be 'the one', and a series of pictures of a hoe. 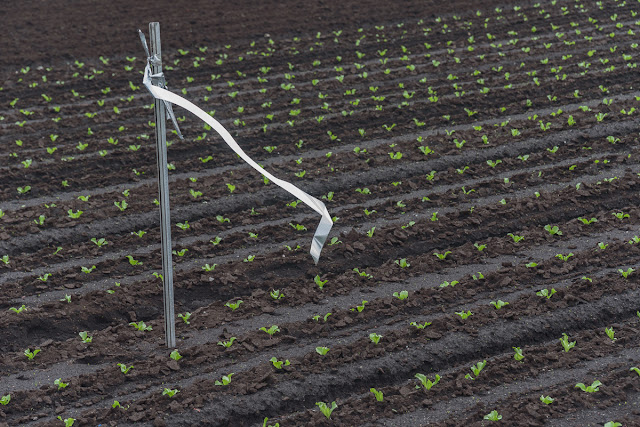 I took a variety of pictures of the how from different angles using different focal lengths and apertures. The one I like best being the simplest one. The overhead shot which showed most clearly the cobbled together nature of the hoe using the insulation tape.. 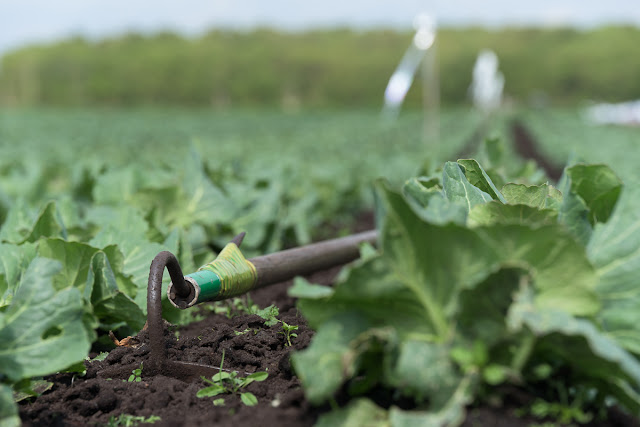 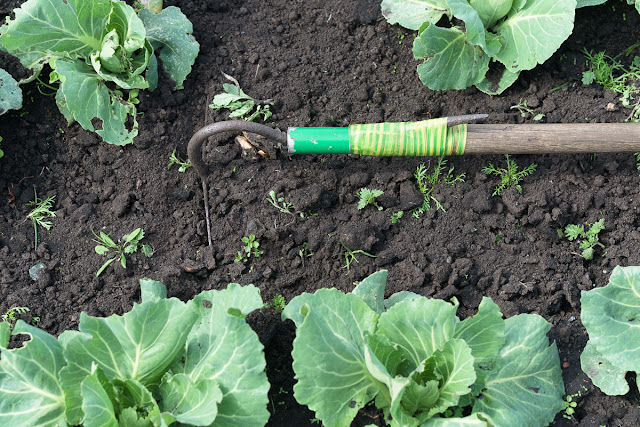 Having brought this project to a conclusion in my usual way (getting bored of it...) there is now a zine in production of a selection of geometric field photos and I should make an effort to put some order into all the photographs I've taken over the last twelve months or more. Maybe even make some prints.
The end of May saw dry and sunny weather return and the restarting of sheep dog trials. My enthusiasm for the trials had already begun to dwindle when they were stopped last year but the chance to go and photograph some people from closer range than on the moss wasn't to be turned down.
The trial I planned on going to was a four day event and I had intended to be there every day for a few hours at least and all day for the finals. As it turned out I couldn't make the second day and the first one had proved less than inspiring. The third day I knew I could only manage a few hours and almost didn't bother but got back into the swing of it and got a few pictures which were worth having. In particular the one of the dogs watching the action while a human uses her phone, and one of the event being live-streamed which was a cut above the more pedestrian shots I've taken of this subject. This encouraged me to make it for the fourth day. 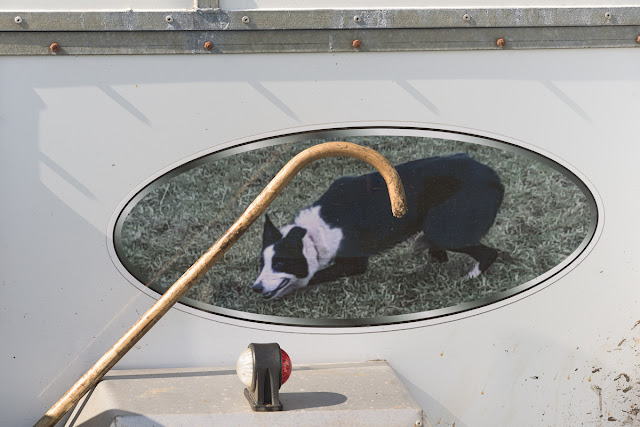 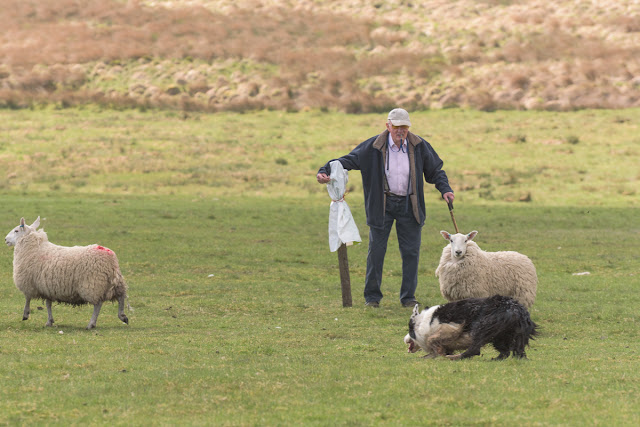 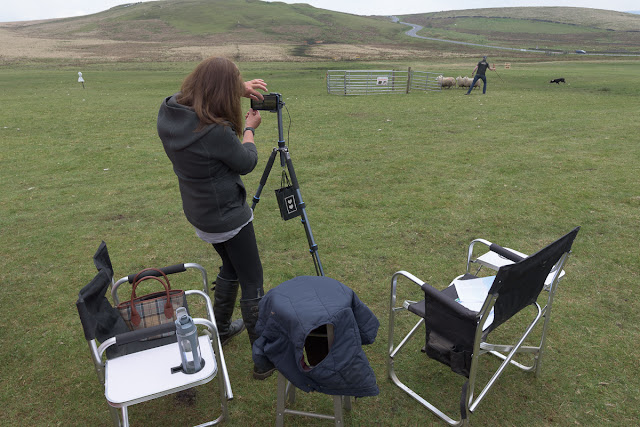 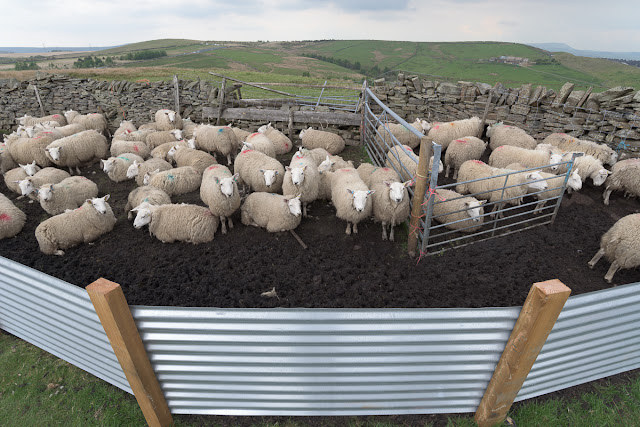 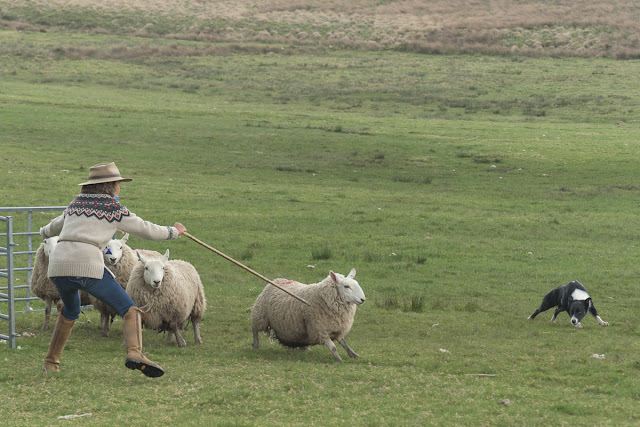 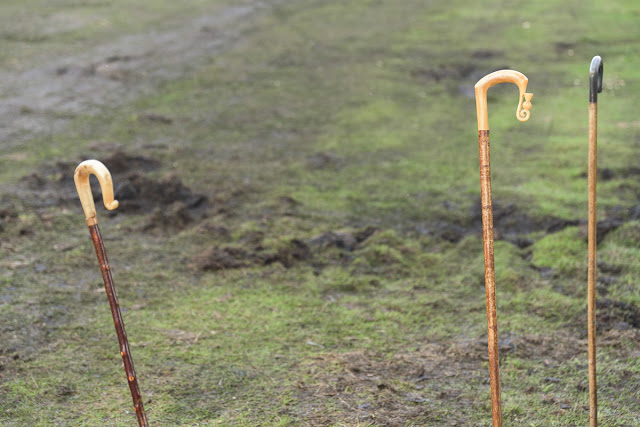 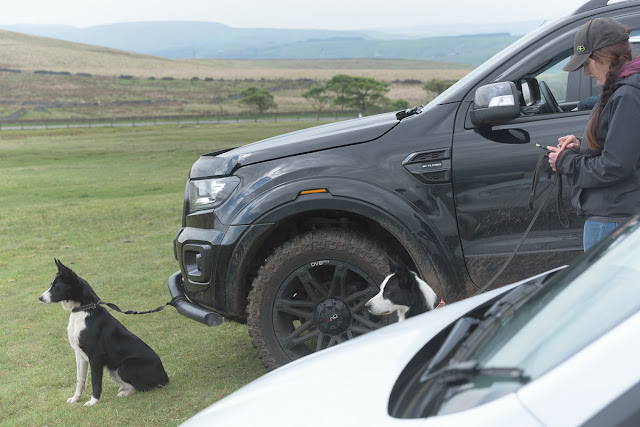 Unfortunately a combination of the heat, it was the hottest day of the four, and a trial where the close range action at the pen and shedding ring was only every half hour or more lead to a lot of slack time. 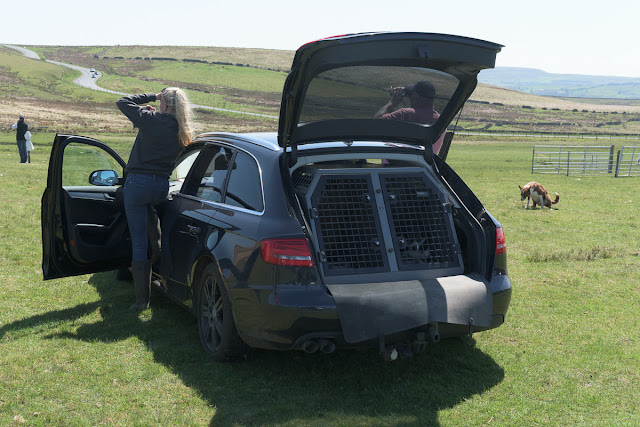 In truth the dog/sheep action doesn't really fire me up but there wasn't much else to photograph that I haven't photographed before. Maybe the heat had got to me too as I felt lacking in energy. I ended up sitting most of the day out in my car watching the trial and checking the cricket score from Old Trafford.
While I might not have been adding much to my documentary archives this last month what I have been doing is playing around at home with artificial light. I think this was really the result of a bout of retail therapy (or gear acquisition syndrome!) had struck me after selling some lenses. My justification for the spending spree was that I wanted to improve the photographs I occasionally take of the fishing rods I make. After much faffing about and buying the wrong stuff I've managed to get close enough to the results I've wanted to achieve.

I'm sure there are many faults in my results but they are only intended to serve as illustrations of what things look like. In truth the people who see them probably couldn't care less about how good or bad the pictures are. Phone snaps would do well enough!
With this new gear I thought I'd try some selfies. I've been reading threads about studio portraiture and lighting on Talkphotography for years now and have always been baffled by the technicalities and underwhelmed by the results. Having always been a 'learning by doing' kind of person I found messing about with the lights and seeing results much easier to understand than being told an understanding of the inverse square law was essential!
Two other things also became apparent. Firstly I like the kind of flat light that the experts seem to despise. Secondly when dramatic/directional light is used it isn't what makes a portrait work. As I keep trying to tell people, good pictures are not all about the light. No matter how good the light is if the subject is rubbish the picture fails. In the case of portraiture it's expression and gesture that are most important, lighting only serves to improve and already good picture. 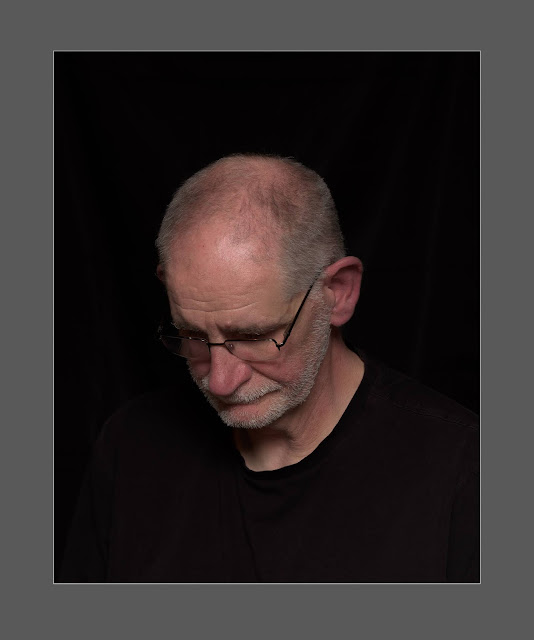 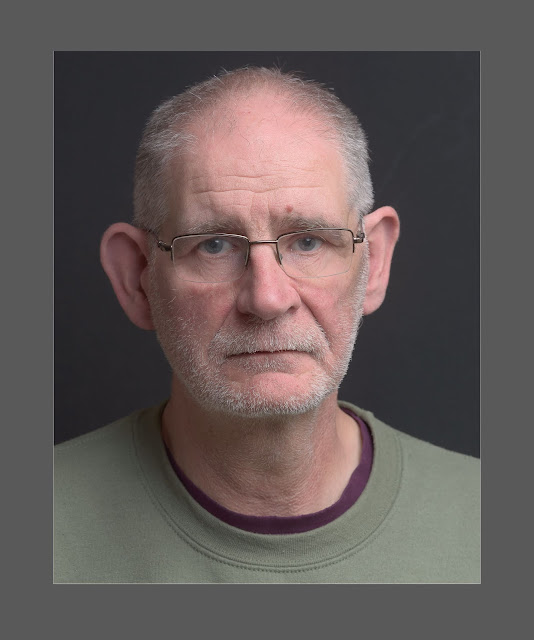 While I'd quite like to photograph other people using lights I still don't find this kind of formal portraiture all that engaging. I much prefer a documentary/environmental style where the relationship of the person to the location is important. All I need are some opportunities to take that kind of picture. Which is where I struggle.
Posted by Dave Lumb at 21:10