The place I'm fishing at the moment is alive with damselflies. Nothing unusual, only the three common blue species, but I've never seen them in such numbers. Not even when I've visited a dragonfly breeding pond. Come evening as the air cools down they become approachable. As teh fish weren't biting I thought I'd see what I could do with just the non-macro 50mm lens I had on the camera.

Filling the frame with a damselfly wasn't an option, so placing it within the frame, stressing the habitat and trying to make interesting pictures was the order of the day. As always with this sort of subject using trap focus (the shutter firing only when focus is achieved on the subject) came in handy. This really should be a standard feature on all cameras, but doesn't appear to be. I set the focus point where I want it in the frame and the focus distance as short as it would go, half pressed the shutter release then moved the camera in until the shot was taken when the insect was in focus. Dead simple.

The aesthetic considerations were mainly about how much depth of field to use and balancing the flash and ambient light. Too small an aperture and the background can go dark and/or show too much detail. The benefit of a digital review is immense in these situations. The two shots below demonstrate how opening up the aperture helped make the damselfly more prominent. 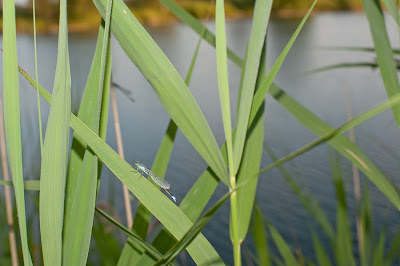 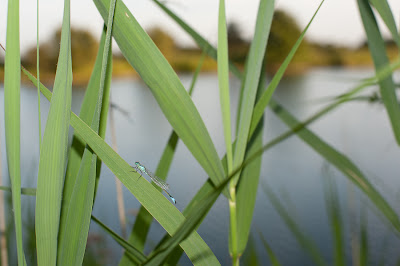 Trying to take photographs while letting the rods fish for themselves never leads to great pictures. My little grey cells dis start working as I considered ways to make pictures of damselflies which were different to the usual close ups which make people exclaim at how much detail there is in the photograph. Of the few pictures I made the one below works best. There is nothing for the flash to cast shadows on behind the subject, so making the picture look more naturally lit. Not perfect (that pale stem behind the damselfly is annoying)  but it might inspire me to go and have another try - without the fishing tackle! 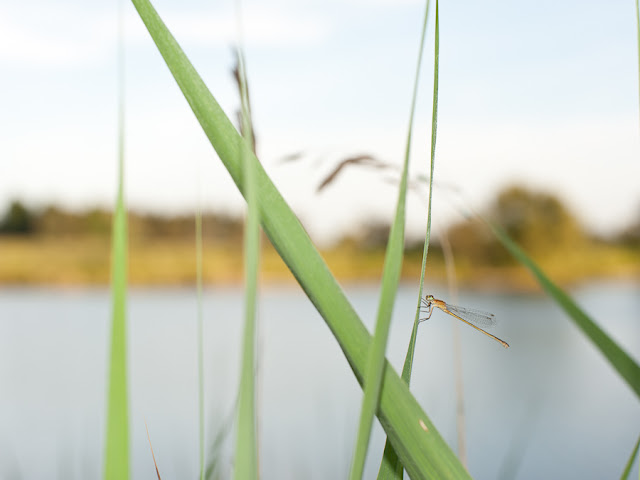