Calling it a day? 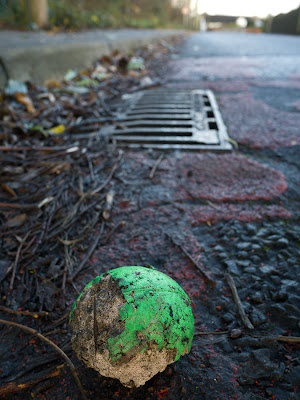 Having photographed ball number 200 this morning I'm wondering if it's time to stop or if the 'series' should be open-ended. It's not as if it's a great hardship to stop and take a photograph or two of a ball when I stumble upon one.

This is the perennial problem with personal 'projects' that have no finishing line. Particularly for someone as indisciplined as me! I need deadlines otherwise I let things roll on, and on, and on. I finished at the quarry because spring arrived. The Gone Out project was time limited as it had to be done in one hit on the day I thought of it. Everything else seems to remain in a state of flux, getting dipped into now and then, abandoned, picked up again.

Part of the difficulty is that taking photographs isn't a full time occupation, it fits in around other things like work and fishing. And I can only concentrate on one thing at a time. If I get my fishing head on then it's fish or bust. When the camera head returns it's photographs or nothing.

At best I'm 'noodling' around with photography. I'm not committed, because such a commitment seems absurd to me. Just as when I noodle around on a guitar most of what's produced is junk. Repetitive or imitative junk. Just the same every now and then something original and surprising materialises. If I get lucky it can be worked into something more substantial.

That's not to say I'm not serious about my photographs, only that I can't take photography very seriously. It's as absurd as catching fish and letting them go. The important thing, personally and psychologically, is in the doing rather than the end result. Both involve problem solving in order to achieve an end. It's that problem solving process that engages and exercises the mind. That's where the interest lies.