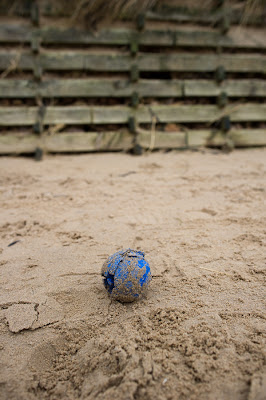 Confronted by lonely balls at the beach when I went to look at what last week's gales had done I couldn't resist. So the series continues!

High tides coinciding with the strong wind had caused some damage. The lifeguard's hut which I have photographed on a number of occasions, in the way I repeatedly photograph things in the hope that one time I'll do so in a surprising way, was missing from it's supporting framework. Once more, in documentary terms, I was reminded how it can pay to photograph the familiar in order to record it before it is changed or disappears altogether.

I tried to make pictures from similar viewpoints to those I had used in the past. The problem was that I naturally framed the shots around what was in front of me, rather than what had been there just a couple of days before. As I had also stuck a short telephoto lens on the camera, and it had begun to rain making changing lenses risky, my hand was forced in terms of perspectives.

The first attempt were fairly predictable, showing the framework in its entirety with something in the background for some context or juxtaposition. I even made one frame with the kite surfer positioned in the gap in the railings. But that was just too obvious. 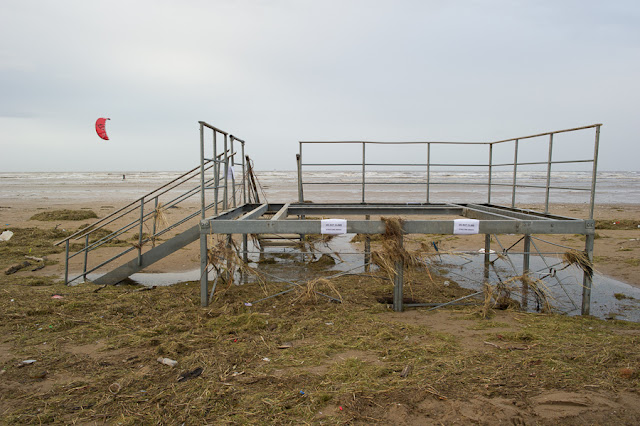 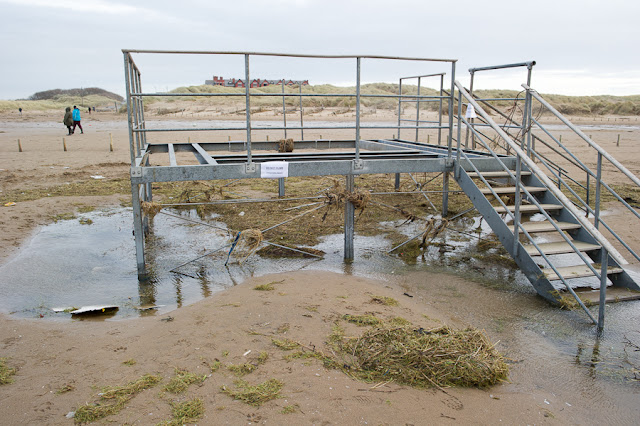 It was only after walking along the beach and returning that I made my favourite picture of the metalwork. It's not always necessary to get it all in to provide an overall impression of something. 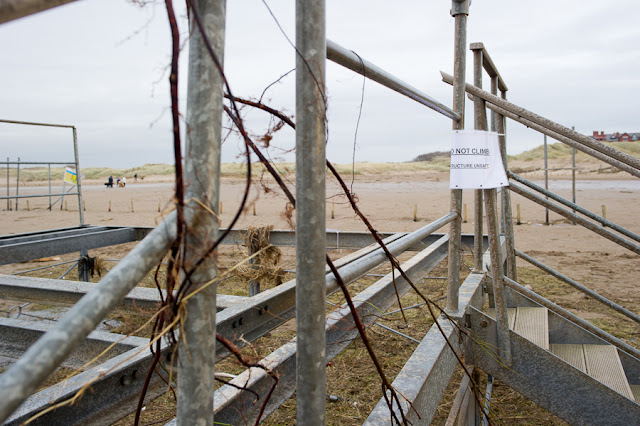 A couple of books arrived this week as early Christmas presents to myself - Why It Does Not Have To Be In Focus: Modern Photography Explained

and Martin Parr: The Non-Conformists

. The former being just one of the multitude of books about photographic appreciation, theory and history that is available today. A far cry from my student days when there was very little. This one is primarily about what I think of as photography as art, rather than photography as photography. In most of the examples discussed the idea is more important than the image. It's a much easier read than the previous addition to my library in this category, Photography: A Cultural History

I was trying to resist The Non-Conformists on the grounds that it would be more of that black and white nostalgia, which it is, but I gave in. I'm glad I did as it consists very much of the the sort of photographs which I liked looking at at the time (see also Ian Berry's The English) when I started taking photographs with a 'proper' camera. It's a style of composition which is either of its time or of its place, I'm not sure which. Perhaps a classical documentary style influenced by Cartier-Bresson. At its best it's not obvious, but it is a style. A choice of subject matter as well as composition I think. Certainly when it comes to the British picturing the British.

At first glance it might seem like Martin Parr's current colour style has little connection to the early black and white stuff. But I see a clear transition, and obvious influences - even, at times, a reversion. There is also inevitable repetition in his 'mature' work - and an obsession with sausages which is either overplayed seaside postcard humour, or something deeply Freudian!

Sausages and all I found this film on YouTube an interesting watch which makes it clear how Parr uses his personal charm to both get, and get away with, his shots. For some types of photography there's more to it than the gear and an eye for a picture. Personality plays a bigger part than is often admitted when it comes to what people choose to photograph.