That great bane of my photographic life, indecision, struck again yesterday. I knew the weather forecast was dire, and even worse for the moors, so had resigned myself to staying home out of the strong, chilling wind and in the dry. I had a parcel to collect and decided to take a walk for it. The weather wasn't too bad and it appeared to be brightening up. Back home I got the camera gear, wrapped myself up and took a chance. Fool.

It was brightening, and the weather was heading in the same direction as me. But it's another world in bandit country! First of all I got the wheels spinning as I looked for a parking spot on the hill. Then I realised that although I'd put my thick, wind resistant fleece on (to good effect) my fingerless gloves  were still in the pockets of my not-so warm fleece.

Technically I was trying a different set up. That lasted about a dozen frames before I ditched it. As it happened the post and pen were quite close to the line of vehicles meaning that 200mm was almost long enough. With the light being poor that was helpful as I could keep my aperture fairly wide. The angles available weren't great though. Time to get some scene setting pictures.

For a moment it looked like the sky was going to break up and some nice cloud formations materialise - along with some sunlight. It didn't last. I did manage to get a tiny patch of blue sky in the frame below. As I was concentrating on the overall framing of the shot and the trialling action I failed to spot the collie looking out of the back window of the Land Rover. A nice bonus.


Failing to spot things was my modus operandi. Why I didn't frame the shot below as it appears here I really don't know. Maybe my brain was cold, or maybe I grabbed it quickly while the dogs were looking at me. Although it still niggles, I am getting more relaxed about cropping my pictures. Just as well, because when it comes to action I find it very difficult to get framing spot on and focusing.


Black and white dogs are a bugger for getting exposures correct. Black sheep aren't much better. It's not so simple to keep detail in their fleeces without messing up the rest of the frame, especially when they are running on pale winter grass under a grey sky.

The break in they uniform greyness was short-lived and soon there was a wall of rain on its way. I managed to get my not-very-waterproof overtrousers on but the rain was blurring my already steamed up specs. Unable to tell if the blurry viewfinder was due to the state of my glasses or missed focus from the camera I felt like I was fighting a losing battle! Something black fleeces do well is show up rain. Unfortunately only really visible when the photos are seen larger.


There are times when pictures really aren't enough. I was chatting to a novice handler prior to her run (it was a nursery trial so the dogs are all inexperienced) and she said both her and the dog were nervous. At previous trials they hadn't done very well and hadn't completed a course. Today I saw quite a few get timed out. Even experienced handlers. Excuses abound such as the wind, the sheep, you name it!

Her dog was from the line of dogs bred by a friend of hers who is now in a home suffering from dementia and she is training the dog, and its sibling, in respect - sort of as a thank you, if you get my drift. The run took place during the sunny spell and went well with the sheep penned easily. The picture below shows the end of the run with dog round the back of the pen to drive the sheep back out. The handler was well chuffed and hoped that when she told her friend it would put a smile on his face. The dog wanted another go!

Despite frequently looking towards the west for a glimmer of light and hope I saw none. Things were not going to get better, weather-wise of photographically. It was time to admit defeat. My damp toes reminded me that I had ordered a pair of boots a couple of weeks ago. That seemed like a good excuse to leave before the trial was over and go collect them. While I was in the shop I picked up a second pair of fingerless gloves so I can leave one pair in each fleece. A small selection of pictures from the day can be seen here.

The forecast for Sunday was, naturally, far more pleasant. So much so that I took a walk along the canal. There is work being done on the lock to the river. Quite what I'm not sure, but the lock looks to be dammed and  there are pumps in place. The sheep on the bank between canal and field were on the move. Being herded towards the pen by the swing bridge. I only had my little camera with me so my options were limited. it should go without saying that where the canal was calm enough to reflect the sheep the background was industrial. Where the background was rural the canal was ruffled by the breeze. Another nice concept poorly executed. 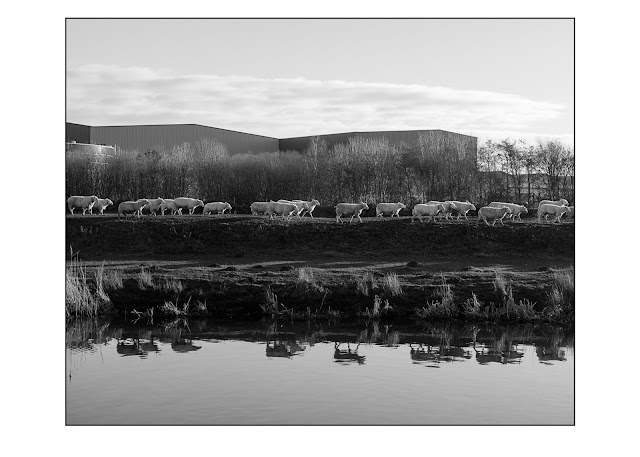