I think I tend to write this nonsense when I have nothing else to occupy my time of an evening as much as when I have something I want to think through.

Last Friday I had a chance to go in to town to get some stuff bought and the sun was shining. It was the sort of light that some street photographers seem to thrive on. I think that is because it makes for contrasty pictures with deep, dark shadows and any colour picked out brightly. The contrast makes for graphic pictures. Regardless of content or composition the results are superficially impressive. I was playing around with pre-focusing the lens on my Fuji and made few snaps. That's all they are, but I've seen worse passed off as 'street photography'! 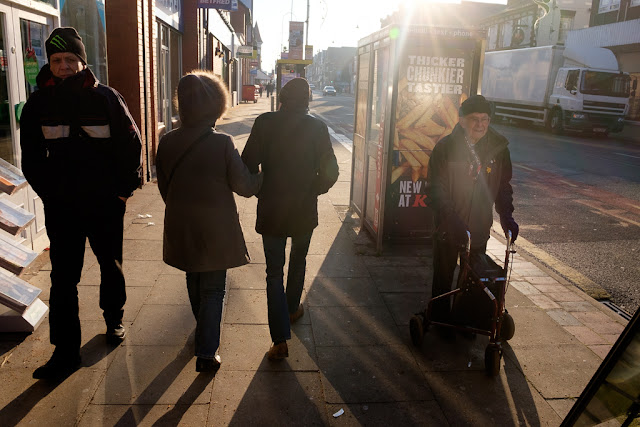 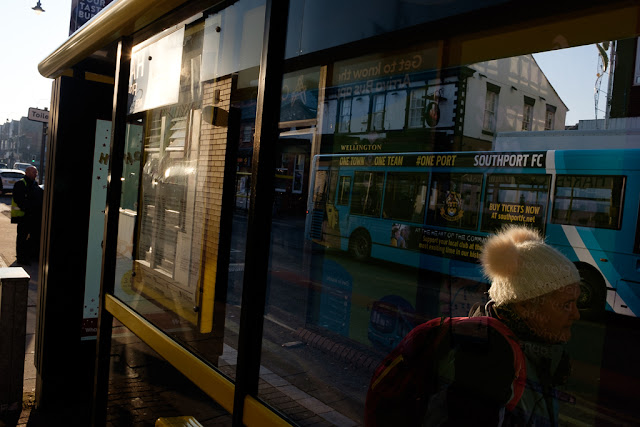 It's all too easy to get seduced by the 'look' of a photograph and ignore the fact that it's really not that interesting a picture. That's the way 'filters' work on various digital imaging gadgets aimed at people who aren't photographers, or perhaps aren't visually educated.

As I didn't have much time I couldn't get into seeing better pictures and since then my time for using a camera has been limited by paying work. And by the usual weather conspiracy. There hasn't been much light at all some days, never mind 'interesting' light. When the sun has shone it's been at times when I've been tied up with something. Today was a case in point. The sun was out in the morning while I waited for the UPS van to arrive. It actually arrived sooner than I'd expected so I got prepared to go out with a camera. By the time I was ready the clouds had gathered and all was dull.

Thankfully the woods project doesn't demand bright sun light. As I am messing about with techniques I can live with noisy pictures, blurred pictures and other assorted 'defects'. I'm not aiming for technical perfection. It was during a visit to the wood on an overcast afternoon that I began looking up. The patterns of the now bare branches when silhouetted became ambiguous. With a little imagination they could look like dark river systems flowing through a snowy landscape seen from above. With a bit of manipulation of tones when converted to black and white these abstractions have something going for them. I've been making more since my first effort. 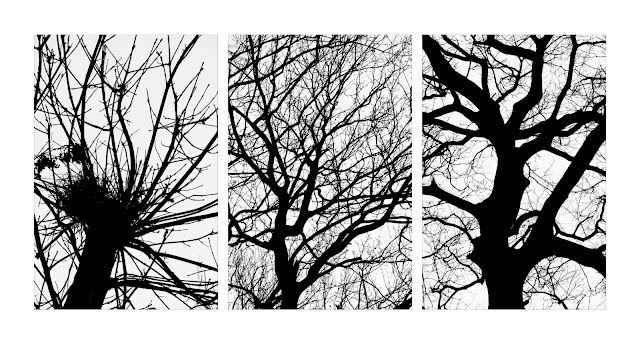 These are an offshoot of the main project, which continues as something exploratory. The less leteral pictures are the ones I'm finding most interesting. Although I'm really not sure if they, as a series, are any good. Nor am I all that sure of what I'm doing! They are not exactly documentary in nature and are more than a bit 'arty'... One thing is for sure. Restricting myself to using black and white when photographing in the wood is more productive than when I have shot in colour. I think the temptation with colour is to look for the usual woodland pictures of autumnal tints or translucent springtime leaves. Chocolate box fare.


When I eventually run out of steam with this project the really hard part will start. Editing the pictures into a series, probably a book. The only way I can think of doing this is to make small work prints and physically play around with them. For once I don't think working with images on a screen will cut it. Not sure why but I reckon it'll be easier to spot the weaker pictures that way.