How long it'll last is anybody's guess, but I'm going to try to stick to my resolution to only take a camera out when I have something firmly in mind to photograph. Excepting taking one with me when I'm going in to town or walking around locally as in both cases I have little projects trundling along when I do that. To kick 2020 off I had two plans in mind. One was a bit half-baked involving tripods and macro lenses. The sort of stuff I don't really like. Thankfully that got ditched before I got anywhere close to the location I was heading for. However there was somewhere I'd stumbled across on the interwebs which I almost went to the other day, but didn't. It involved a route which would take me past a couple of places I have stopped off at for aimless wandering. Could I resist the temptation?

Sort of. I pulled over at a lay-by to have a bite to eat. When I got out of the car to stretch my legs I spotted some Lonks. Maybe a chance for a sheepscape. When I approached them on the public footpath through their field the lambs (or are they hoggs now?) approached me. They must have thought I was a bringer of food! It gave me an opportunity for some sheepy portraits. When three stopped and posed it was impossible to resist the near symmetry. 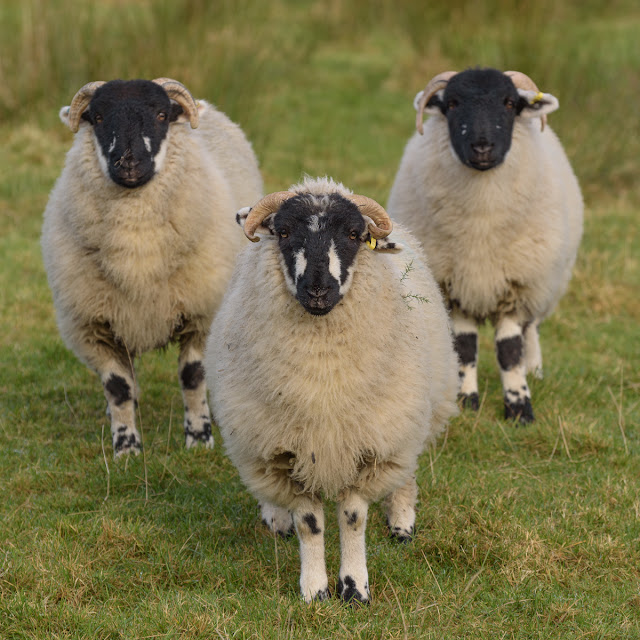 With Lonks photographed and food eaten it was on the road again. The usual stopping off points were packed with people. That's what New Year's day and sunshine do. This was a blessing in disguise as it meant I wasn't tempted to join the throng and I carried on to my intended target. Which turned out to be deserted. Of course by the time I got there the sun had disappeared. For photographing the outside of the church this was not ideal, although bright sunshine wouldn't have been any better. 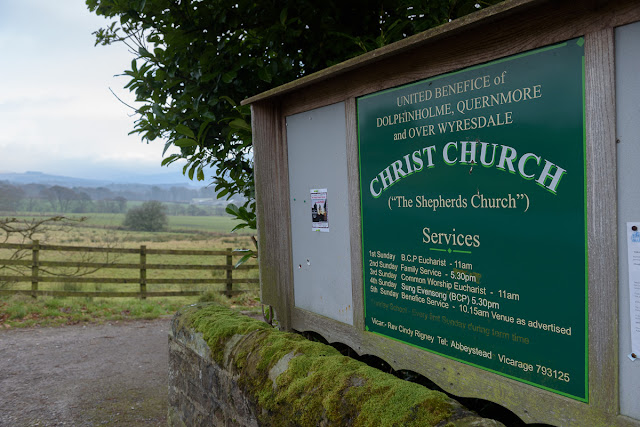 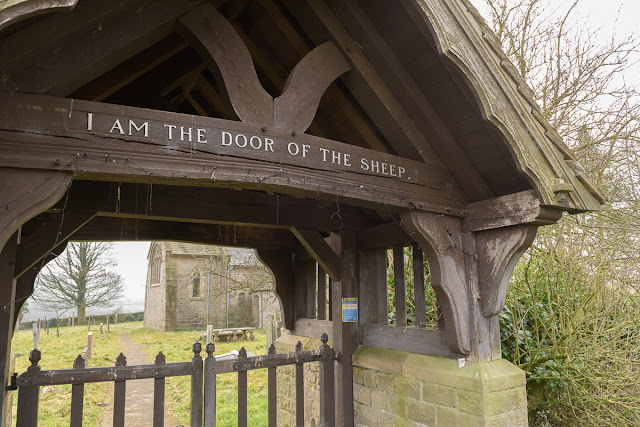 Inside it was another matter. Diffuse light was just right for photographing stained glass windows. After taking a series of shots I wasn't satisfied with the results using available light. The windows were fine, but they were outlined in blackness. I turned to the lighting gurus' hated option. The pop-up flash of my camera. I'm no lighting expert but I knew enough to knock the flash power back a bit. One stop, in fact. This did the trick. 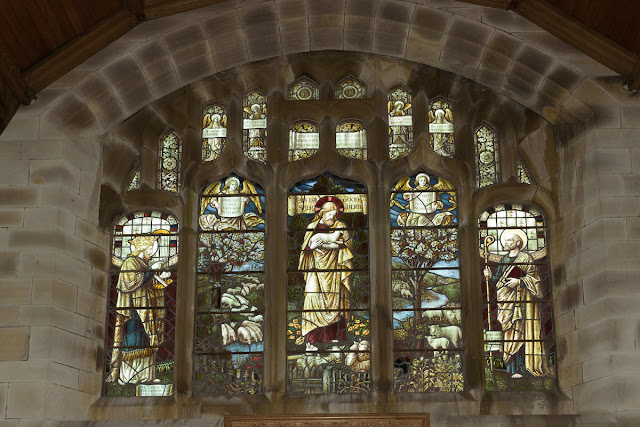 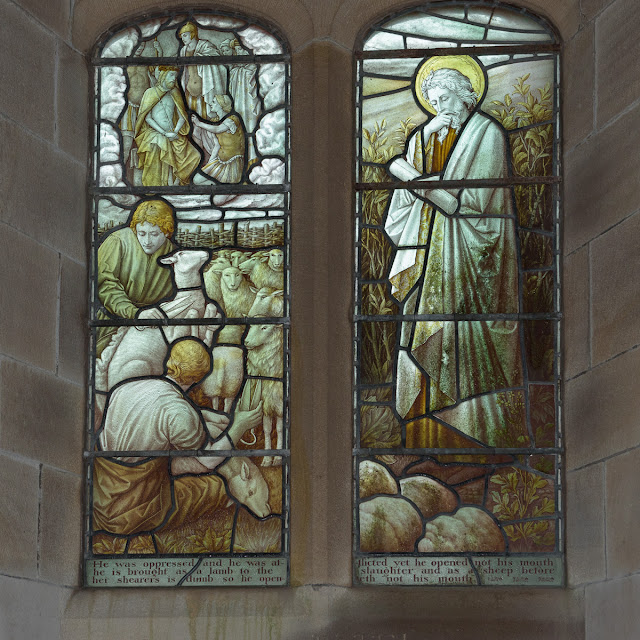 Ideally I'd have used a tripod to enable me to drop the ISO and decrease the aperture so as to get greater depth of focus for when I came top correct the verticals in Lightroom. I'd also have taken more care over framing to allow for the cropping which vertical correction entails. I might even have bracketed shots to allow some exposure blending in post. But for a first, down and dirty, attempt at this sort of thing I was quite pleased. I made a grid of the pairs of windows. 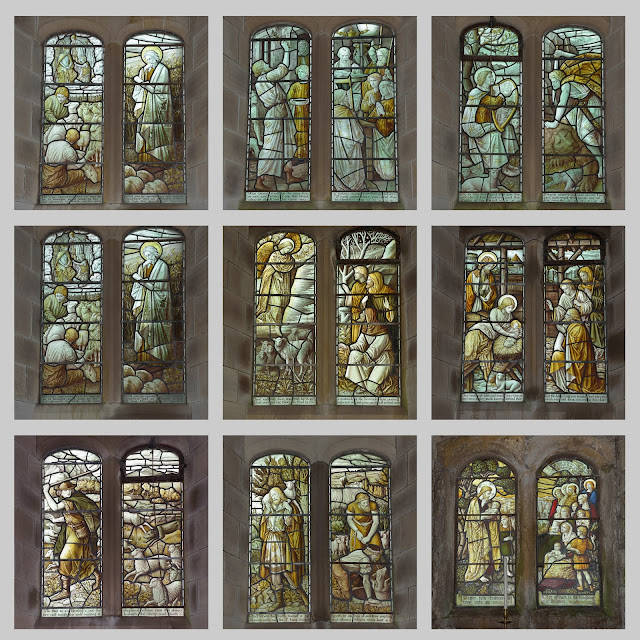 After I'd done my processing I thought I'd google 'how to photograph stained-glass windows'. The pages the search threw up showed examples which were worse than mine. None recommended the use of flash. I'll take Frank Sinatra's advice if I do this again!

Leaving the church I thought I'd try to set the scene of its location. This wasn't easy and the grey sky didn't help much either. I got some record shots which I may try to improve on at some point. 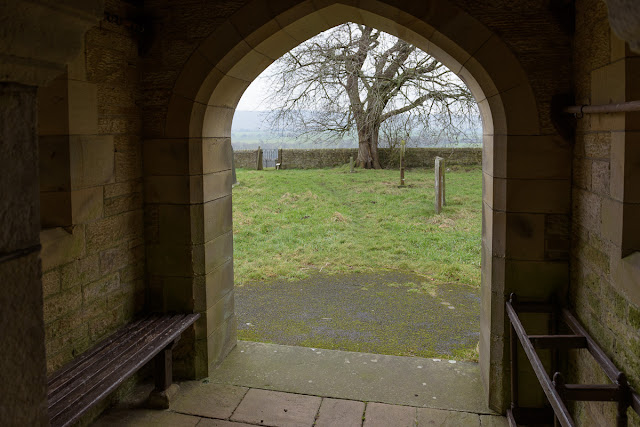 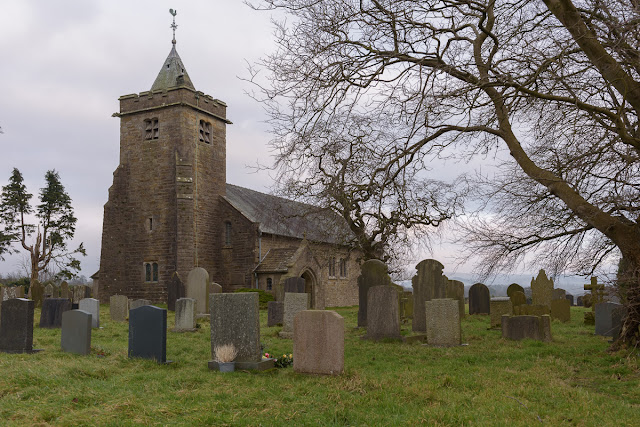 I guess this adventure counts as sticking to my first photographic resolution. The second one will be harder to adhere to as it means going way out of my comfort zone. If (big if) I manage to even partially maintain my resolve it should make a real difference to my photographic output. Breath not to be held...