It's been another week of up and down weather. Throw in the time limitations work makes and it's been a case of getting out when the opportunity arises. either during a break in the rain or early doors. At least I don't have far to go to make pictures for the meanygate project, and access is always available even if there isn't always anything to see.

One day I might get bored of photographing the bird scaring kites. Not for a while I suspect! 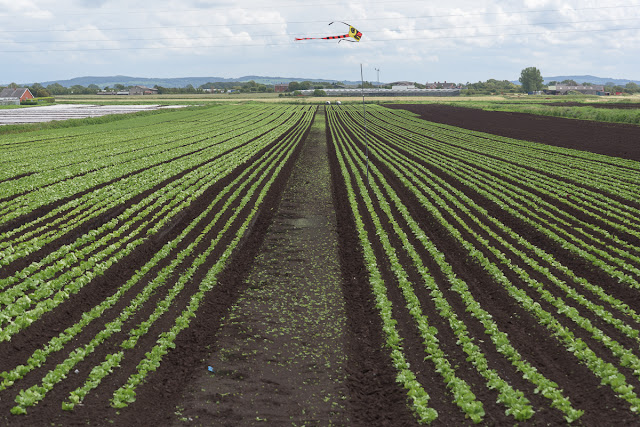 On the morning walks I'm more likely to encounter work taking place. I'm finding the seedling trays almost as big a draw as the kites. One morning I made the picture below of 'before and after' trays on a trailer. 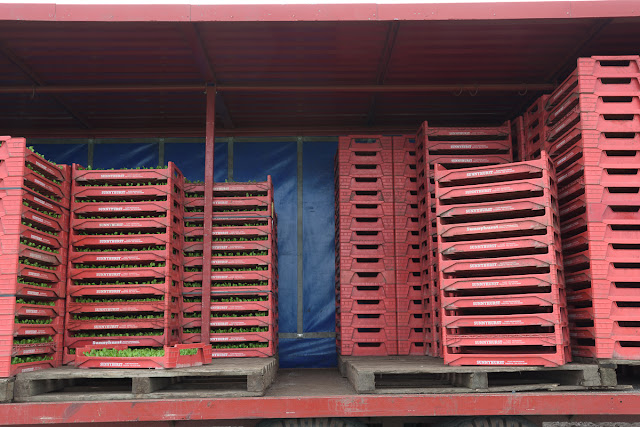 One my next visit there was more going on giving me a chance to take some pictures to provide more context. It's that push-pull of decisions between making stand alone 'art' pictures and story telling pictures. 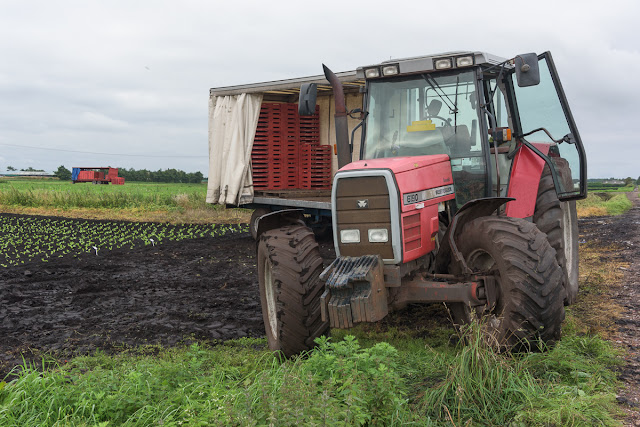 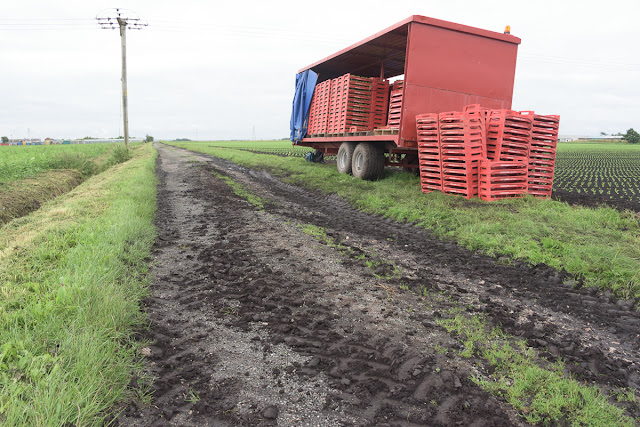 I even got a bit 'clever'. I don't think too clever though. 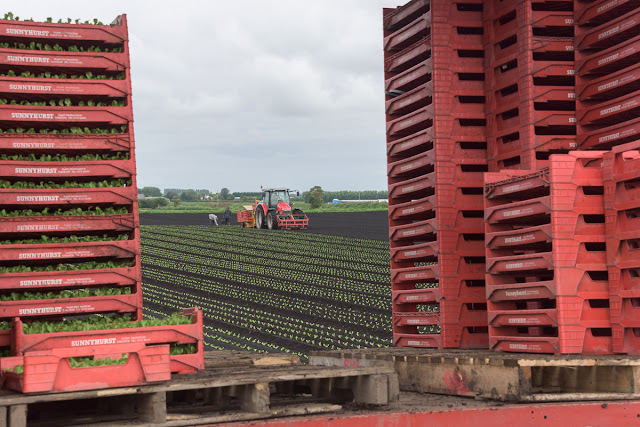 I like the idea of the the next picture, but it should have been technically better. Like a fool I didn't check it for focus/sharpness and the tractor (which is what I focused on) is a bit soft. But as I always say, display it smaller enough and nobody will know it's soft! 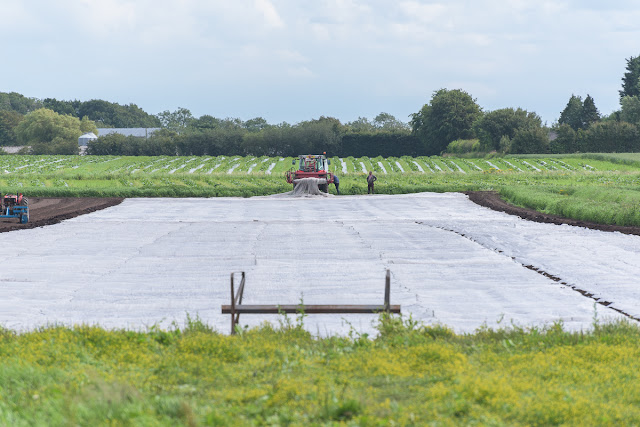 This pic must have got me thinking because on a subsequent wander I changed my viewpoint for a picture of a fleece reel. I'm starting to break out of a visual rut and thinking about adding variety to the pictures. 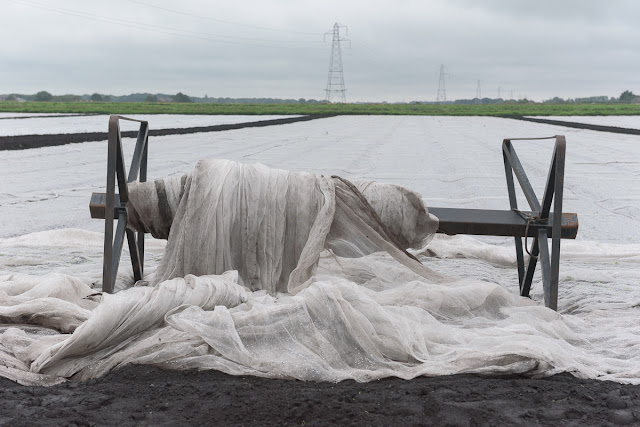 Just a snap as I didn't have time to think about framing this one. The idea was to get an old and a new tractor in the frame, but the composition isn't good enough. It's another idea filed away in my memory banks to be dragged out at some appropriate time. 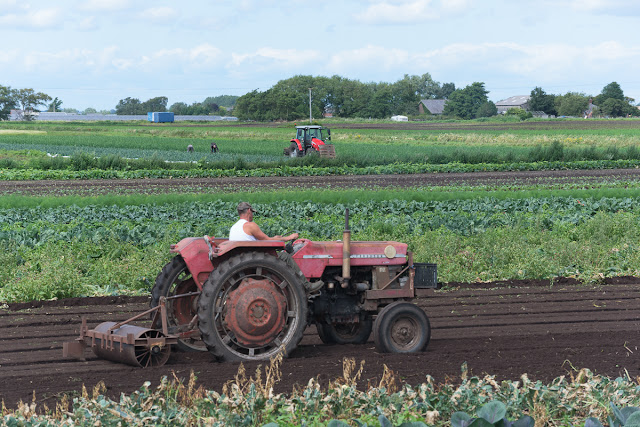 A later walk taken after a morning had improved saw me passing the hose reel which is better photographed earlier in the day. I contemplated exposing for the sky and lifting the shadows in post but popped the flash up for fill instead. I think it worked OK. Not too obviously lit. 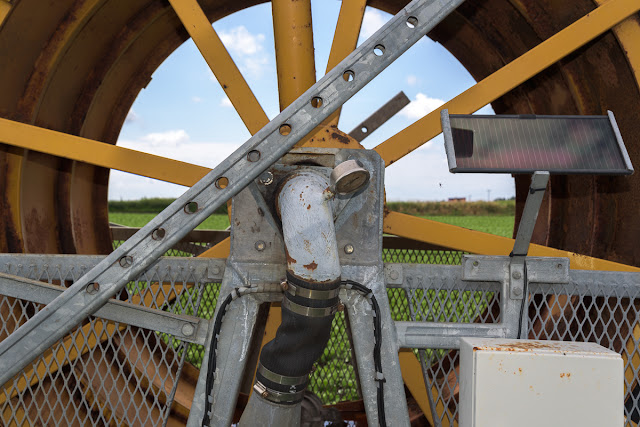 One way or the other I need to start adding pictures of field work. The hard thing is to make visually compelling pictures. There's a bit of before and after interest in the ploughed and unploughed earth in a picture like the one below. A number of frames showing the turning procedure in which the harrow is jettisoned before the turn and picked up again might make for a sequence. Single images are more of a challenge. 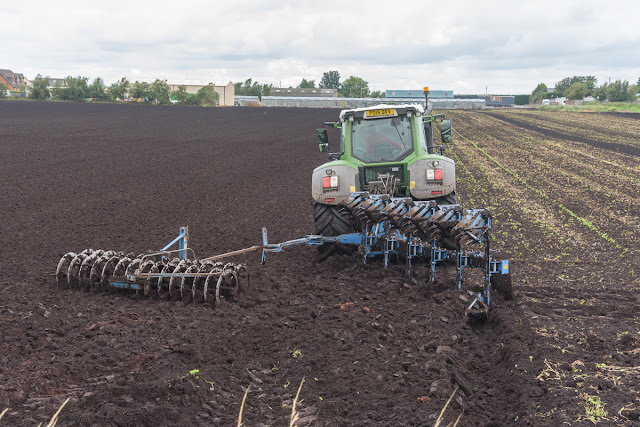 When the tractor turned right in front of me I saw a potential picture a fraction too late. D'oh! Another for the Nearly File... 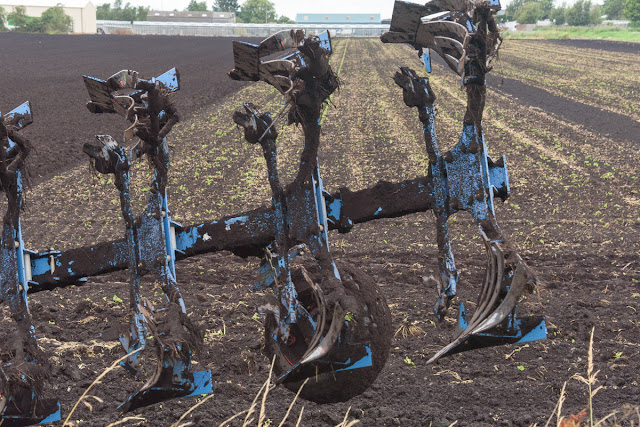 That's been about my lot for the meanygate project. I'm still thinking about how to move it forward. Without much success.

The greenhouse pics have moved on a bit. I took a few more which, with some planning and additions might work up into a grid. Either as an out-take from the meanygate thing, as a standalone, or part of a future greenhouse project. I'll see. 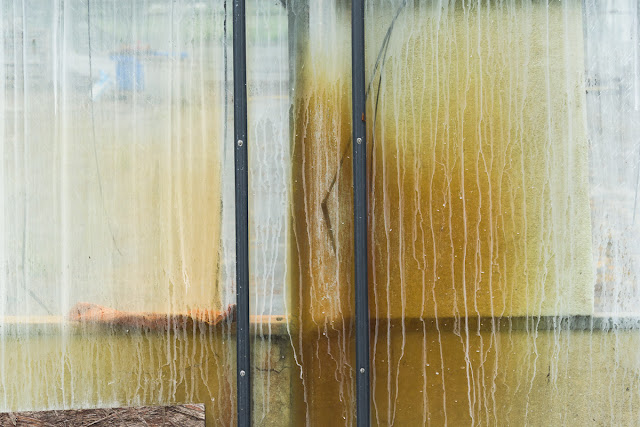 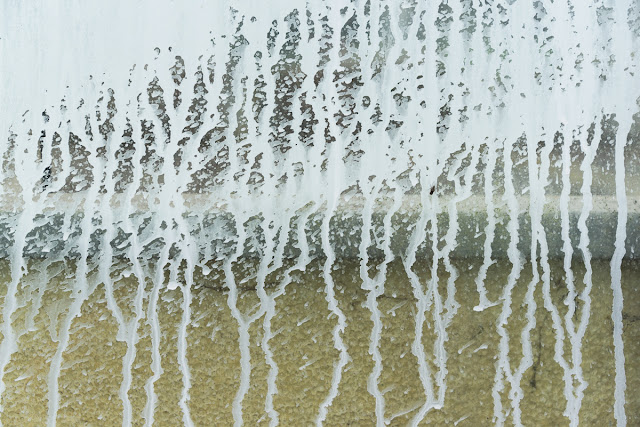 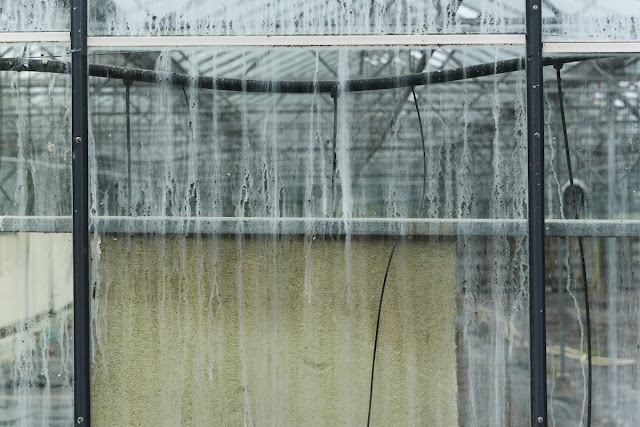 Outside the project I carry on taking random pics. I'd seen these chooks looking out of their pop hole previously but not stopped to photograph them. This particular morning I did. I was glad I had the 28-300 attached. Which was a pity in one way as it made me more indecisive about getting rid of it. The picture needed a bit more processing than I usually do because there was a distracting out of focus patch of light green in the centre at the bottom of the frame. I couldn't quite get high enough to keep some hedge out of shot. It was a simple fix. A desaturation brush over the area and it was gone. This worked because of the dark wood. A slight decrease of the exposure as a graduated filter up from the frame bottom finished the job. I's also cropped in a little from the left for symmetry's sake. 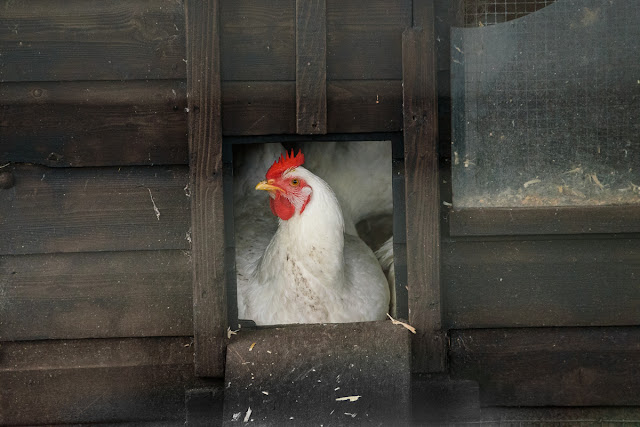 Given that the lens was used wide open and the ISO was 7200 it's pretty well detailed and noise free at larger viewing sizes. An example of how high ISOs are more usable in good light than in poor. Which the review sites tend to gloss over when talking about high ISO performance.

Enough of the technical nerdery. The picture works because the subject is central, there's a near symmetry, and the colour palette is limited with a strong colour to draw the eye to the main subject. The hen's pose, being in profile, helps too. Not a great shot, but one I'm reasonably satisfied with.

Sheep dog trails are slowly starting up. Some are not allowing the public to attend because of the Covid-19 rules. Surprisingly I'm not finding myself too bothered by that. Maybe I've burned myself out on that front? It was certainly getting harder to find new pictures and my enthusiasm had been flagging because of that in the way it did with poultry shows. Then again, I'm only capable of maintaining one obsession at a time, and the moss farming is what's occupying my thoughts right now.