The weather and work have again kept me from venturing forth. if the day was dry I was tied up with work, if I had spare hours the rain arrived. I'm typing this when I'd rather be out and about while the rain lashes down again.

This said I have had some fruitful outings. This field being drained had been spotted on a day I had no time to stop the carp. Luckily work hadn't carried on a couple of days later when I was free to go for a look. It's yet another of my centrally aligned near-symmetrical compositions which are building into a substantial collection. 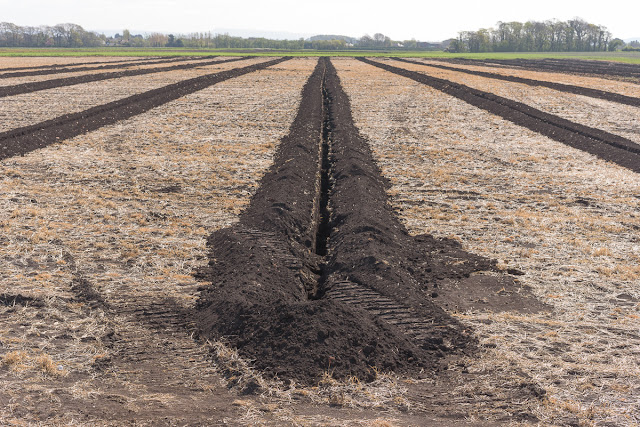 The fields of fleece and bags make regular appearances in this collection. 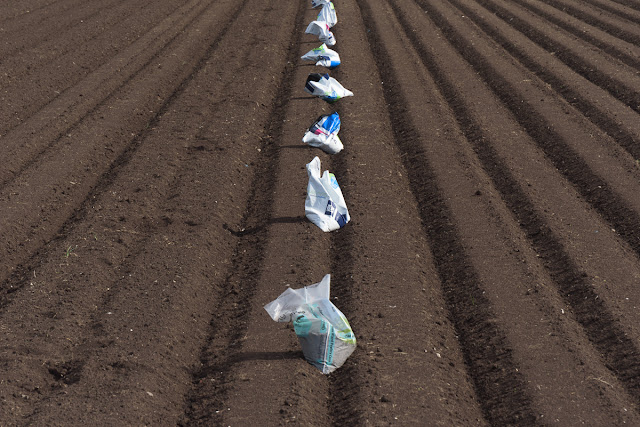 On one late afternoon walk when the sun shone I passed by some pigeon shooters and their decoys. If I hadn't been on a mission, which proved fruitless as my missions usually do, I would have lingered and taken more pictures. As it was by the time I returned they had left. 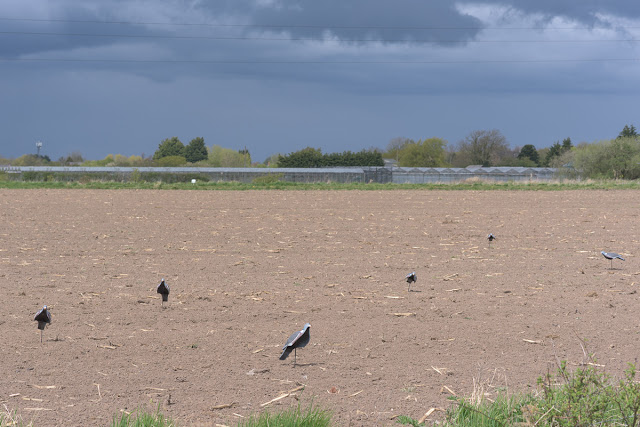 Setting out late in the day has been a feature thanks to the tedium of waiting in for deliveries. This means that by the time I hit the moss work is coming to an end for the day. So it was the day onions were being planted. The last rows going in as I arrived on the scene. 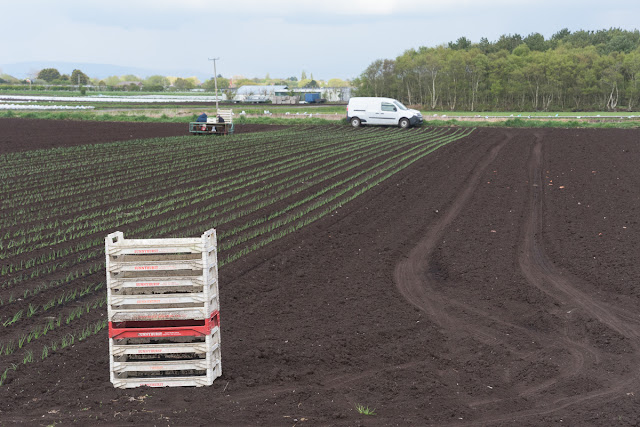 The new month didn't start off much different. When I did manage an hour or two earlier in the day my daft idea of taking just two single focal length lenses backfired on me with plenty of work taking place but too far away for the lenses I had with me. I guess I need to decided if I'm working on a project or just playing around. Maybe play around away from the moss? Still, I have improved slightly on my search for a photo of the Private Land sign and the yard beyond. 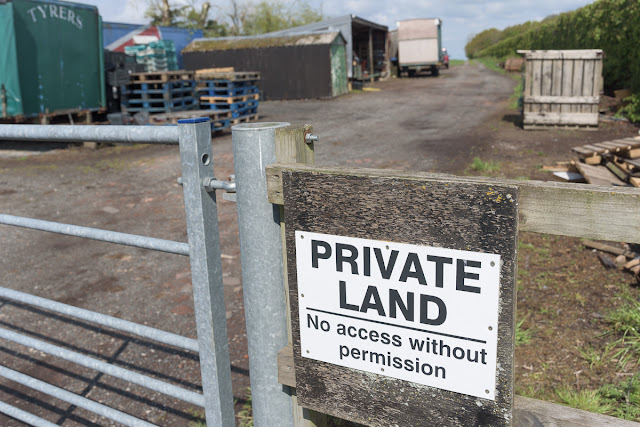 When there's a ditch between you and the subject you want to photograph having a zoom lens can help you get the best angle. That's why this picture isn't framed the way I'd have preferred... 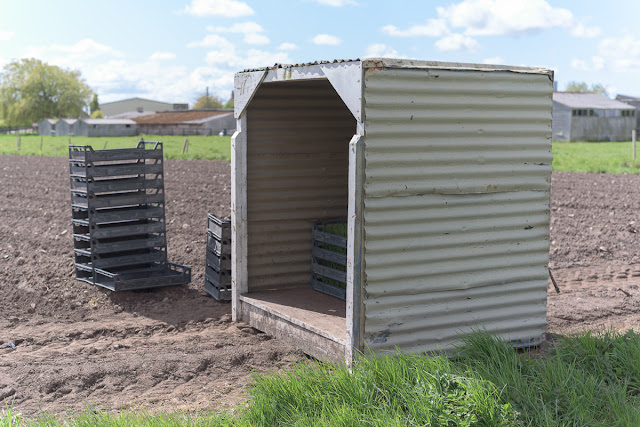 It might have been cool and breezy but the sun was at least shining and the morning looking set fair when I started out. Rounding the corner on to the moss itself the distant sky looked ominous. Great as a backdrop when the sun illuminated the foreground making the colours sing. Not so great as a prospect to be walking towards when the clouds were heading my way. 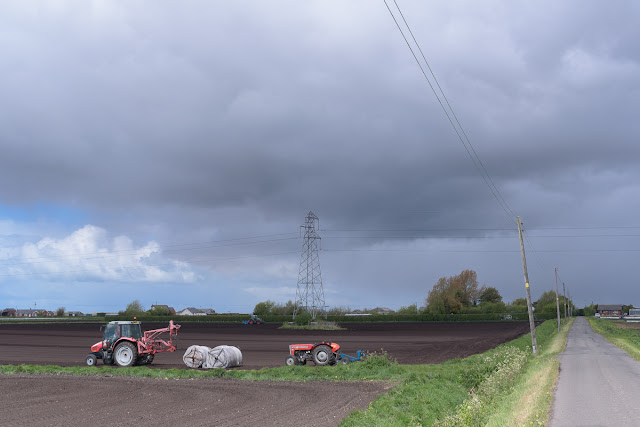 Not onions being planted, but still going the wrong way - like the weather. By the time I'd walked another fifty yards it hit. Not just rain but hail too. I was lucky to take shelter by the greenhouses, the wind strong enough to blow most of the precipitation past me. Planting was called off and an early lunch taken while I waited out the passing of the shower. Ten minutes of standing around and it was dry again. April showers in May. 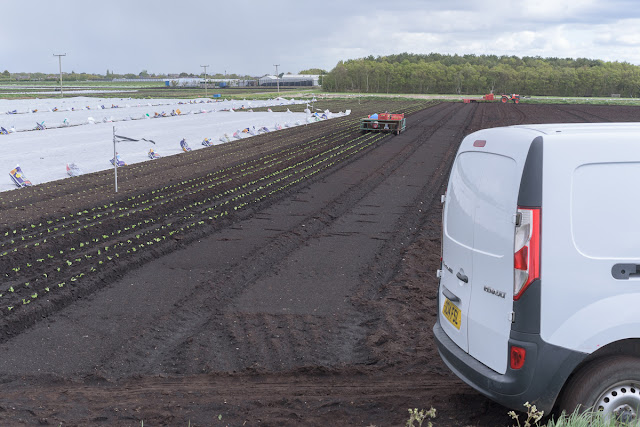 The moss project, such as it is, has therefore made little progress. The Lost Balls Found project, on the other hand, has reached it's conclusion. I spotted ball number 500 and managed to get a sharp photograph of it! It's a bit of a mish-mash of a series as far as artistic merit goes, but it was something I wanted to get out of my system. Now it's done I can stop looking out for lonely balls! 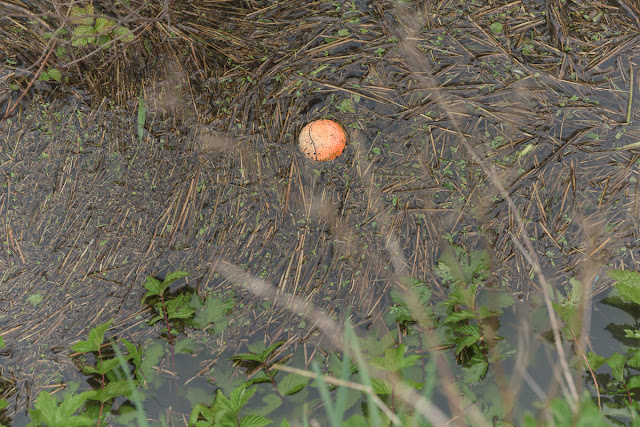 The zine swap is in full swing. Fifteen of us involved this time and already six have dropped through my letterbox. Mine is still in the pipeline but expected to arrive on Monday. I can't wait to find out how appalled the other fourteen are with it! When they are all complete and received I might have something to say about the swap and zines in general.