The end is nigh

The 'toy' cameras had to go. Nothing wrong with them as image making machines, I just found them impractical with the annoyances outweighing the advantages. When the quote I got for the lot was more than I'd anticipated I gave in to a GAS attack and instead of taking the money and running went for a trade in on a camera I've fancied for some time. I liked my Fuji X10 only getting rid of it because I wanted a flip out screen for fishing. I almost really liked the Fuji XE-2. But there is something about the X100 series with it's fixed lens that has always appealed. Probably to a sense of nostalgia more than anything. The original model was noted for being sluggish in the focusing department, which put me off when it was relatively new. But Fuji seem to make improvements to their new models rather than alter them for the sake of it. The third generation seemed to be much improved and with the fourth now available it was affordable.

When the used X100T turned up it lacked a user manual and a lens cap. Manuals can be downloaded for free as PDF files so that wasn't a problem. Lens caps are fifteen quid! Luckily the camera did come with a lens hood and a thumbrest. The lens hood allowed me to screw in a near 40 year old skylight filter to protect the lens when the camera is in my jacket pocket or rattling around in my shoulder bag. The thumbrest looks like a gimmick but makes holding the camera with one hand really comfy and feels secure.

Batteries charged and off I went to the beach yesterday. It being the last Saturday before Christmas there weren't many people around for me to pester. The upside being that all the shots which went wrong due to my unfamiliarity with the new camera were just random snaps. One mistake, however, had something about it and with some heavy processing gave me an idea for a short project. All I need is bright, low sun. So that'll be the end of another project idea! 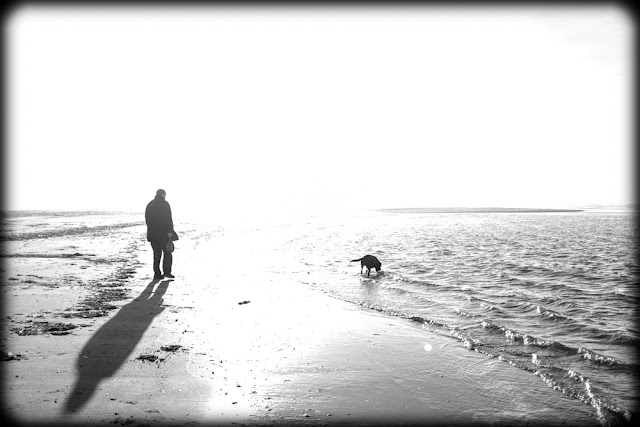 One my way back to the car I took some of my 'pictures of nothing interesting' shots, and found the camera ideal for them. I can see it might be useful for my jaunts around town. It's snappier to use than the upmarket compact I was using before the 'toy' cameras. That can go back in my fishing bag for the time being as the idiot-proof camera I can had to passers by. 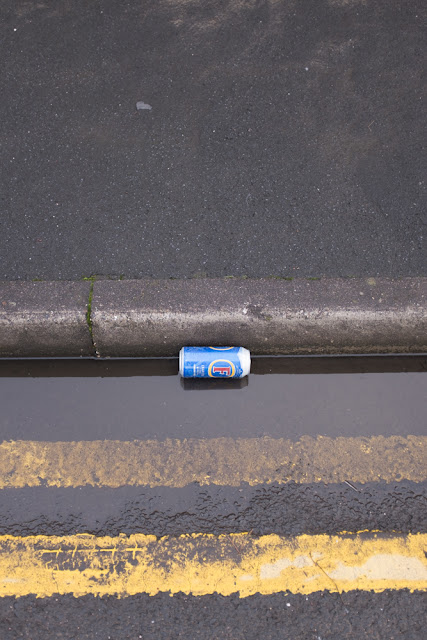 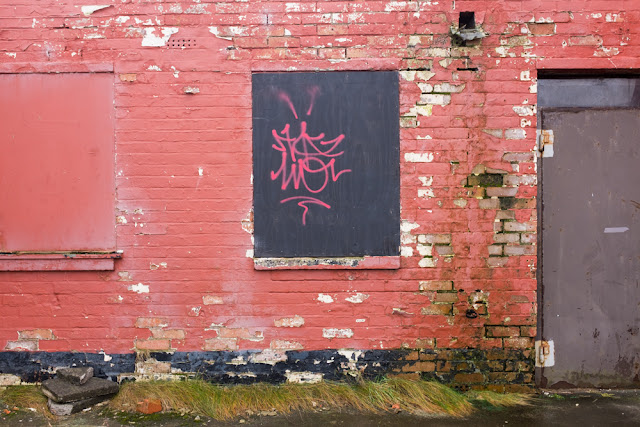 Having had time to evaluate the results I was keen to have another outing with the camera and set off for the beach again on Sunday morning. I didn't make it. There had been big changes at the sandplant which I hadn't noticed the day before. If I had spotted them I'd have packed some more appropriate gear. One camera with a 35mm equivalent lens and another with the 85mm lens I don't get on with attached wasn't my ideal choice.

If I'd had a wider lens with me I'd have made different pictures, but as it was I don't think I'd have made any better ones. Taking a lot of pictures, even knowing that most would be deleted, over a short space of time while thinking about what I was doing proved a good way to learn the camera. I came away fairly happy with the way I had it set up and reasonably fluent in using it. No major niggles causing frustration as was the case with the toys. One nice feature is that by pressing and holding the 'menu' button most of the buttons which might get pressed accidentally can be locked, while others still function. While the electronic viewfinder is good, it can be switched off and an optical one used. Nice. It feels like the camera has been designed by people who use cameras rather than electronics geeks. 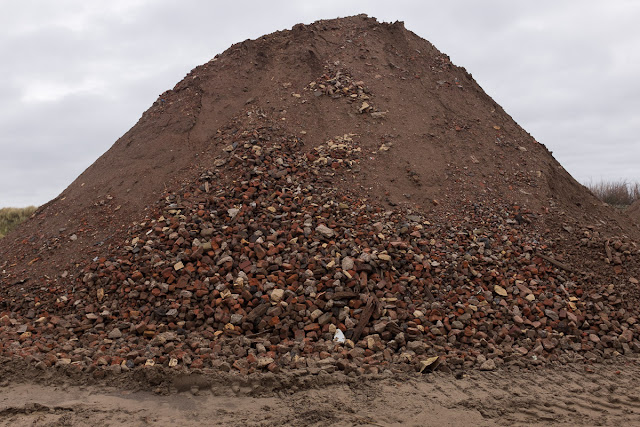 The changes at the sandplant look very much as if the final layout of the place has been settled on. The bund which was across part of the flat area has been extended, the sand and debris on the seaward side removed and the whole area towards the saltmarsh cleared and levelled. There is now an embankment surrounding a flat area on the same level as the road. Large piles of sand waiting to be removed are inside this area. 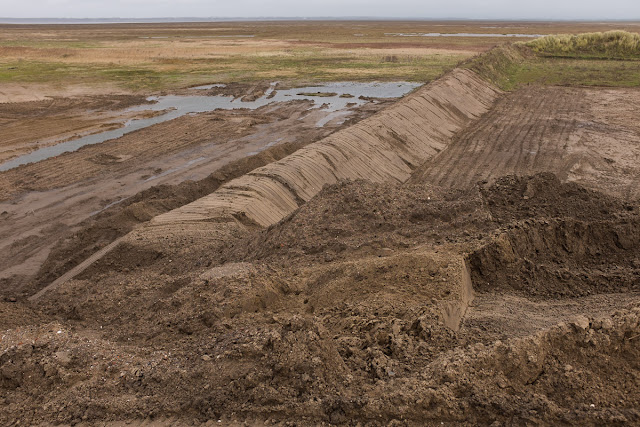 The last brick building has been demolished and the scrap metal collected in a pile. It won't be long before the work is complete. Then we'll have to wait and see what happens next. I'm sure the birdy people would like to create another eyesore, sorry, visitor centre... More pics, which I doubt a different camera would have made any better, here. 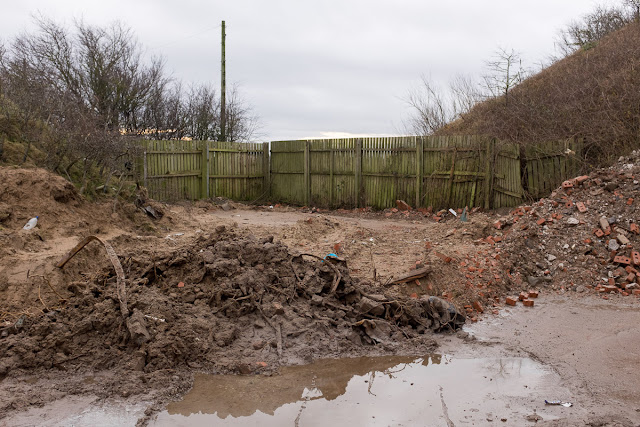 A quick visit to the beach saw the cameras pretty much staying in my bag then back home for lunch and a look at the results. Content and with still plenty of life in the battery I thought I'd head to sheep country as the forecast for Monday was one of rain.

I went armed with the same two focal lengths as a challenge, and because I was mostly scouting rather than seriously looking for pictures with the day still overcast. However there were plenty of sheep about near where I parked. But they weren't up for a photoshoot. I tried to do some 'arty' stuff suggesting what the area is like. It didn't come off too well. 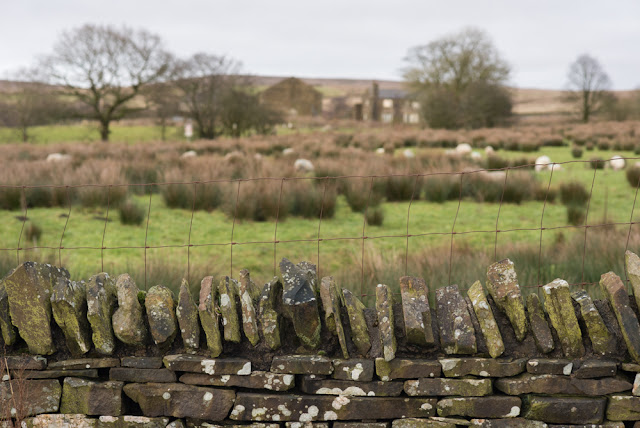 Then I went somewhere else I didn't expect any sheep but thought I'd have a look around anyway. As I started walking the sun came out! They are difficult to make out in a small rendering but there are sheep on top of the hill behind one of the most photographed dwellings in the Chorley region. 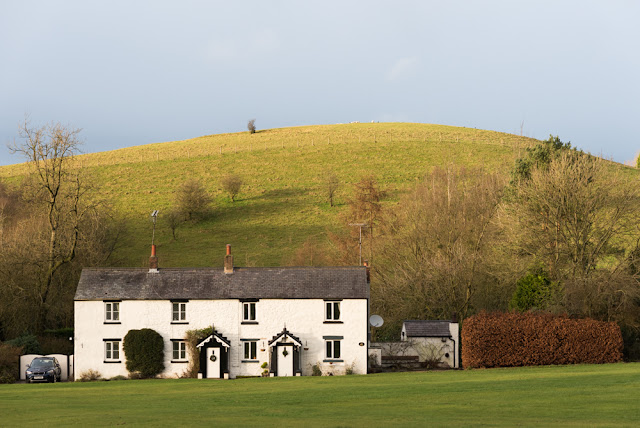 Although it's at the foot of the moors this is a former industrial area. The stream which flows down from the hill has been channelled and managed by sluices in days past to fill a chain of lodges. Three are no more, one having been drained quite recently. There are plenty of relics of this water management system still to be found. If it was the sort of thing I could get into photographing it would make for an interesting project. But it's too much like landscape photography, and too dependent on the light for my butterfly mind to cope with. I still enjoyed blundering about looking for angles to make pictures while the light was 'interesting'. Again, I used the new camera finding it capable and not annoying. A flippy screen might have helped, but you can't have everything! 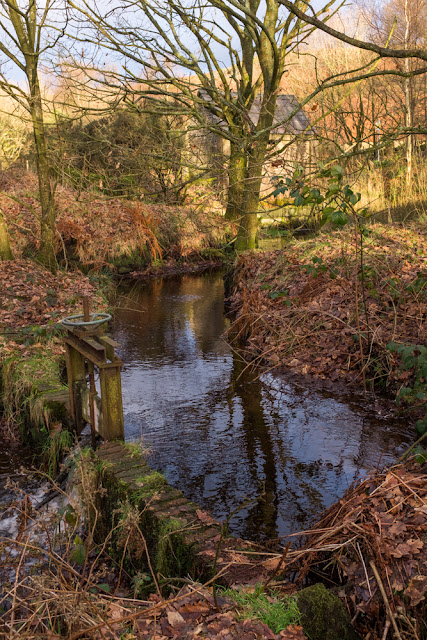 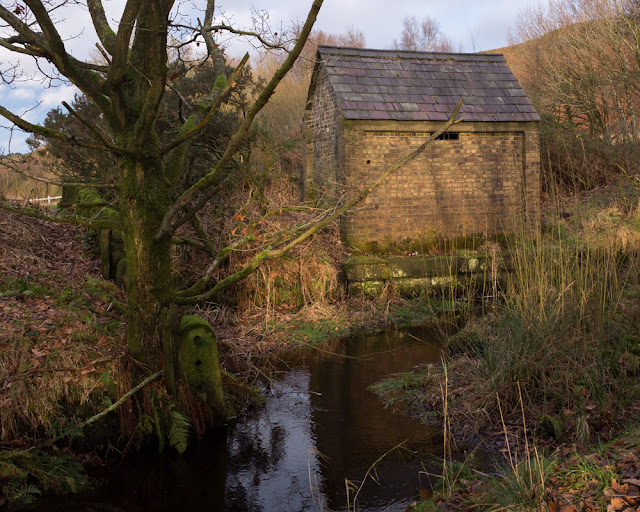 So far the camera is proving usable, but the real test will come when I try it at a poultry event or similar. That won't be for some time though and I'd like to give it a dummy run somewhere before hand, but  can't think of anything going on which might be suitable.
Posted by Dave Lumb at 19:12